Scientists have identified a protein, called GlyRS, that launches cancer growth and appears to contribute to higher mortality in breast cancer patients… 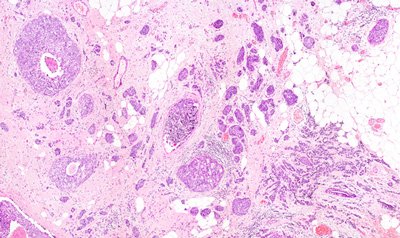 Scientists at The Scripps Research Institute (TSRI) have identified a protein, called GlyRS, that launches cancer growth and appears to contribute to higher mortality in breast cancer patients.

“We have potentially found an important target for anti-cancer treatment,” said TSRI Professor Xiang-Lei Yang, who led the study.

The new study reveals that the protein is actually a double agent – in addition to its biologically essential role in making proteins, it can help to further modify proteins in a way that launches cancer growth.

The researchers found that overexpression of GlyRS may lead to too little p27 – a protein that Yang compared to a stop sign for cell growth.

Specifically, the team found that GlyRS creates a protective shield around a modifier protein, called NEDD8, and safely “chaperones” it to meet its target protein, called cullin. With NEDD8 in place, cullin is activated to degrade p27.

Kept at the right levels, p27 regulates the cell cycle, stopping potential cancer growth. But when GlyRS levels increase, too much p27 gets degraded and cells multiply unchecked.

This process is especially dangerous given GlyRS’s additional function in protein synthesis, which supplies cancers with the proteins they need to keep growing.

When Mo analysed data from a breast cancer tissue database, she found that patients with increased GlyRS had higher mortality.

Although this research is at the basic stage, the team believes it could guide future cancer diagnostics and therapies. For example, measuring GlyRS may provide a marker to help doctors predict how quickly a patient’s cancer might progress.

The team now plans to study the effects of GlyRS in different types of cancer and the possibility of developing a drug to inhibit GlyRS.