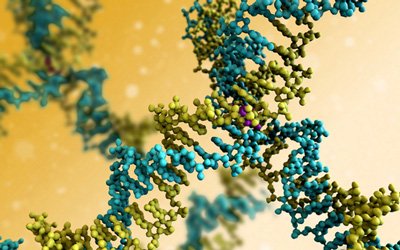 Scientists have developed a powerful new method for finding drug candidates that bind to specific proteins.

The new method is a significant advance because it can be applied to a large set of proteins at once. The Scripps Research Institute (TSRI) researchers demonstrated the technique to find “ligands” (binding partners) for many proteins previously thought to bind poorly to small molecules that can be used to determine the functions of their protein targets and can serve as starting compounds for the development of drugs.

Among the newly discovered ligands are selective inhibitors of two caspase enzymes, which have key roles in multiple diseases but have largely eluded efforts to target them with drugs.

“Our data suggest that the human proteome is much more broadly targetable with small molecules than has been previously appreciated,” said principal investigator Benjamin F. Cravatt, chair of the Department of Chemical Physiology and member of the Dorris Neuroscience Center and Skaggs Institute for Chemical Biology at TSRI. “That opens up new possibilities for developing scientific probes and ultimately drugs.”

The new method is partly based on an approach known as fragment-based ligand discovery, which uses candidate ligand molecules about half the size of the small molecules in pill-based drugs. For initial screens to find potential ligands, such “fragment” molecules are much more efficient than drug-sized molecules, requiring much smaller libraries of compounds for a thorough search.

Cravatt’s team attached candidate fragment molecules to a class of other molecules that, when they can get close enough, react strongly with cysteine amino-acids on proteins, locking the ligands to the proteins with strong “covalent” bonds.

“You still need an affinity-based interaction, but the covalent bonding event provides a significant boost in potency,” said Keriann M. Backus, a research associate in the Cravatt laboratory.

The scientists devised a screening system in which they can apply these covalent-bonding fragment molecules one by one to entire collections of proteins expressed in human cells. The method can even be used with intact, living cells in a culture dish. The system allows researchers to detect and identify which small-molecule fragments have bound covalently to which proteins in the samples and which specific sites on the proteins are responsible for binding.

Applying a small library of cysteine-reactive fragments to the proteins found in two types of human cancer cells, the scientists found that the fragments successfully “liganded” more than 750 different cysteines found on more than 600 distinct proteins – which equated to more than 20 percent of all the proteins assayed in the samples.

Many of these proteins belonged to protein classes, such as transcription factors, that have been considered virtually unligandable, and therefore “undruggable.” In fact, about 85 percent of the newly liganded proteins are not listed in a standard database of proteins with known small-molecule ligands.

“This experiment has effectively expanded what we think of as the ligandable proteome,” said Backus.

The researchers were able to confirm the accuracy of the system, for example, by showing that it can identify the known protein targets of a covalent-binding anti-cancer drug, ibrutinib.

The team also demonstrated that some of the protein-binding ligand molecules identified with the system have strong biological activity – and thus have the potential to be developed into scientific probes or drugs. Newly discovered ligands for the enzymes IDH1 and IDH2, for example, turned out to block the activity of the normal versions of the enzymes as well as the mutant versions implicated in many cancers.