New molecules could help in the fight to prevent cystic fibrosis

Researchers have identified new molecules that could help in the fight to prevent diseases caused by faulty ion channels, such as cystic fibrosis… 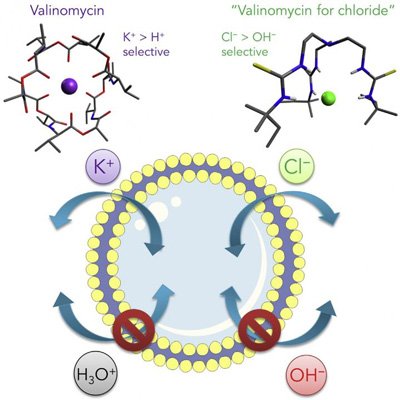 The two anionophores that show high selectivity for carrying chloride ions over protons and hydroxide. CREDIT: University of Southampton

Researchers have identified new molecules that could help in the fight to prevent diseases caused by faulty ion channels, such as cystic fibrosis.

Ion channels are proteins found in a cell’s membrane, which create tiny openings in the membrane that regulate the movement of specific ions. Defective ion channels are the underlying cause of many diseases in which the transport of chloride ions is impaired.

Synthetic transporters that can carry chloride through lipid-bilayer membranes have been developed that could potentially replace the function of faulty channels. However, these transporters may also carry protons or hydroxide ions, which could disrupt pH homeostasis in the human body and lead to undesired toxic effects.

The new study is the first to show examples of anion transporters with a high selectivity for chloride over protons and hydroxide. The researchers first demonstrated that proton/hydroxide transport is an overlooked side effect of synthetic anion transporters that were previously assumed to just carry anions. To address this problem, the researchers synthesised two new molecules that showed high selectivity for carrying chloride ions over protons and hydroxide. One of these compounds enabled chloride transport in real cells without seriously affecting lysosomal pH.

“A paradigm shift for transporter design”

Commenting on the research, Xin Wu, from the University of Southampton, said: “These new findings represent a paradigm shift for transporter design and provide important clues on how to develop anion transporters for different biomedical applications. We showed that different classes of anion transporters can have different behaviour in regulating ion gradients, membrane potential and pH gradients in cells. You need to pick the right molecule to have the desired biological effect for treating a certain disease.”

Professor Phil Gale, Head of Chemistry at the University of Southampton, added: “We demonstrated the possibility to develop molecules to replace the function of chloride channels without disrupting pH homeostasis. This is a significant step toward real biomedical application of anion transporters in the battle against cystic fibrosis and other diseases caused by faulty ion channels.”