Unforeseen efficacy and safety-related issues with drugs continue to be a major cause of their attrition, despite significant efforts that are expended to eliminate them prior to initiating clinical trials… 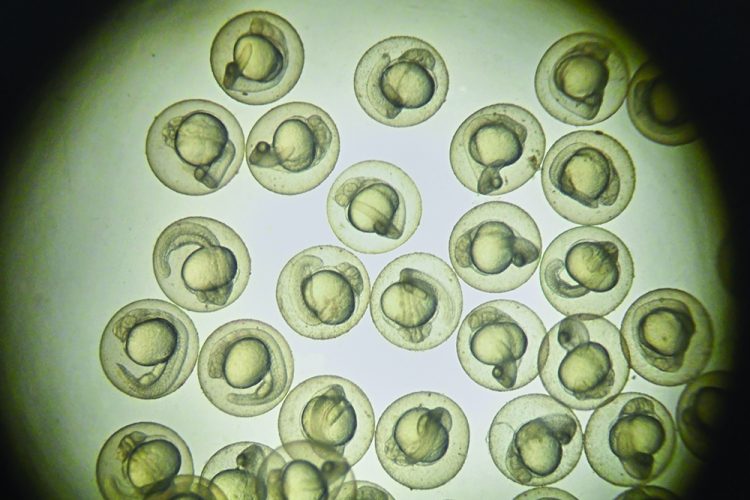 This suggests that the current methods are not predictive of how compounds may behave in a human setting1. Specific ways these issues are being addressed include the assessment of compounds using a variety of in silico, in vitro and in vivo methods with the outputs enabling the progression of the most promising compound. The nature of these methods depends upon a number of factors such as protein target class, disease indication, route of administration, location of the target and tolerance of off-target effects. In this article we describe some of the methods used, in general, and focus on the zebrafish early life stages as versatile tools for screening neuroactive compounds and detecting developmental neurotoxicity in vivo.

A number of important parameters pertaining to compounds can be calculated and predicted with in silico methods, such as assigning them with the well-known Lipinski rule of five that relates to the bioavailability of orally-administered drugs2. Other areas in which in silico methods are employed include virtual screening, compound design, structure-activity relationship analysis, absorption, distribution, metabolism, and excretion modelling and drug-drug interactions3 and these outputs do require confirmation using appropriate in vitro methods4. Modelling the complex nature of biological systems based on in vitro data, however, is error-prone and, thus, in vitro to in vivo extrapolations remain a major bottleneck of predictive approaches. Alternative models such as zebrafish early-life stages promise to enhance the translational value by adding an in vivo dimension to in vitro signatures. 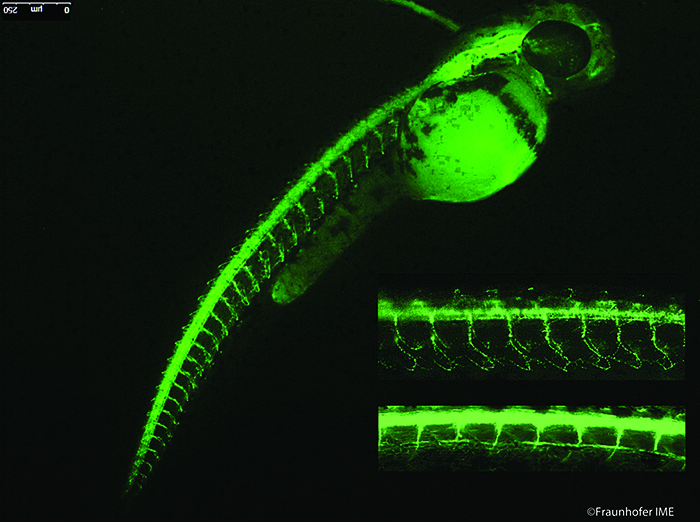 Identifying neurotoxicity or reliably predicting the neurotoxic potential of a candidate drug in preclinical studies is a desirable goal that still faces numerous challenges, in terms of suitable models, informative biomarkers and translational value5. Developmental neurotoxicity is of particular concern because the developing nervous system is far more susceptible to injury caused by neurotoxic substances6. Current regulatory tests for developmental neurotoxicity (DNT) are based on expensive, complex, long-term and ethically disputed mammalian experiments, which are also unsuitable for screening and large-scale toxicity assessments7.

The requirement for suitable and reliable screening assays for the detection of DNT is not only limited to preclinical drug safety studies. An increasing number of known and emerging pollutants of the aquatic environment are being identified as neuroactive, or even neurotoxic, to aquatic organisms. Many of these pollutants are long-established, high-market-value drugs or their metabolites. Very often, the underlying mechanisms leading to unanticipated neuroactive and potentially adverse effects are unknown or poorly understood. The increasing presence of neuroactive water pollutants causes a considerable and unpredictable hazard to humans and wildlife.

Neurotoxic trace contaminants in drinking water supplies have the potential to impact neurodevelopment and alter behaviour and cognitive function. A growing number of epidemiological studies have provided evidence of possible links between behavioural abnormalities in humans, particularly children,8,9 and environmental exposure10 for example, to insecticides11, and have subsequently spurred public awareness and health concerns. Exposure to environmental neurotoxicants has also been associated with risk factors for developing neurodegenerative diseases such as Alzheimer’s or Parkinson’s disease12,13.

However, within the current legislative frameworks, regulating chemicals and their environmental release, neurotoxic effects are of subordinate relevance14. Companies specialising in zebrafish research services, including Phylonix (Cambridge, MA, United States), have been offering zebrafish-based assays for drug development for more than ten years, and studies assessing developmental toxicity – and specifically neurotoxicity – were among the first in their service portfolio.

In our own studies, we apply zebrafish embryo assays successfully for the detection of DNT, and the current approach combines morphometric parameters with molecular and cellular markers. We recently demonstrated that zebrafish embryos can help classify the neurotoxic potential of environmentally hazardous substances when the severity of neurotoxic damage to individual primary and secondary motor neurons 48 hours post-fertilisation (hpf) is assessed15. A simple whole-mount fluorescent-immunostaining method reveals motor neuron defects, which can be used as markers of neurotoxic insult. A transgenic green fluorescent protein (GFP)-expressing zebrafish line facilitates the assessment of developmental neurotoxicity in live embryos, using gfap as a reporter gene and GFP intensity to quantify central nervous system (CNS) defects.

The glial fibrillary acidic protein (GFAP) is a marker of radial glial cells in fish and mammals, which are progenitors of neuronal precursors, astrocytes and oligodendrocytes. We have tested this approach to investigate the neurotoxicity of different model compounds including thiocyclam, disulfiram, cartap, genistein, metals and reference chemicals (positive and negative controls: ethanol, nicotine, and 3,4-dichloroaniline [3,4-DCA], SU4312 and triclosan).

We have been able to link neuronal defects after exposure to characteristic morphological phenotypes and behavioural deficits affecting the escape response of the 72 hpf-old larvae. By comparing the effective concentration values (EC50) for neurotoxicity and those for teratogenicity, an index is obtained, which provides an estimate of the DNT hazard potential of a substance. The positive control substances for neurotoxicity, ethanol and nicotine, show neurotoxicity index values of <1.0 whereas the index of the non-neurotoxic model compounds 3,4-DCA and triclosan are clearly >1.0.

For metals, we are investigating mechanisms of DNT by functional transcriptome analysis and sifting through the data sets to identify potential gene transcriptional markers, such as mmp9/mmp13a (matrix metalloproteinase9/13a), hsp70 (heat shock protein70) or mt2 (metallothionein2). Furthermore, behavioural assays have an importance in the DNT studies since endpoints such as the photomotor response or other light-dark transition responses enable sensitive and reliable read-outs for the detection of DNT. Simple tests such as the touch response (escape response) of 72 hpf larvae can provide useful information regarding neuromotor function deficits16.

Behavioural assessments that can be performed in 96-well plates and digitally analysed are powerful tools for drug safety and can be employed to detect neuroactive, as well as neuroprotective, compounds. Neurobehavioural profiling of drugs/compounds using zebrafish embryos shows great promise for high-throughput screening applications where modes of action can be discerned in a barcode-like manner17-20. By using behaviour-based zebrafish in in vivo screening approaches, novel CNS-targeting compounds can be identified, including molecules that require metabolic activation as well as those of unknown mechanism of action18,21. Zebrafish embryo-based behavioural assays certainly have the edge over similar tests performed with rodents in terms of costs, time, informative value and statistical power because repetition of assays and replication of organisms are not limiting factors.

An immense amount of information has been generated by life scientists and the bulk of it exists in disparate data sets. From a drug discovery perspective, this can confound the selection of the optimal compound for progression22. This is particularly relevant when activities of compounds are required to translate from in vitro to in vivo circumstances. This is being addressed in part by the eTOX (‘electronic toxicity’) consortium developed within the framework of the European Innovative Medicines Initiative that aims to develop in silico prediction systems for organ and in vivo toxicity23. Stem cell-derived in vitro systems are now a viable alternative to primary cells in drug discovery as they may be more predictive24. Finally, zebrafish can be used to detect undesirable adverse effects, developmental neurotoxicity or to screen for neuroactive compounds25-26 and these are just a few examples of the numerous possibilities of how zebrafish embryos and larvae can be successfully utilised in early drug discovery.

DR SHERAZ GUL is the Head of Assay Development & Screening at the Fraunhofer-IME SP, Hamburg, Germany. Prior to this, he worked for GlaxoSmithKline for seven years, developing biochemical and cellular assays for high-thoroughput screening. He has a PhD and five years’ post-doctoral research experience from the University of London.

MARTINA FENSKE is currently the Zebrafish Research Team Lead at Fraunhofer IME-TMP, Aachen, Germany. She is a trained biologist and received her PhD at the University of Halle-Wittenberg (Germany). She gained postdoctoral experiences as a Marie-Curie Fellow at the University of Exeter and worked for Syngenta Ltd. in the UK, before becoming a Fraunhofer Attract Fellow. Since her PhD she has been engaged in fish toxicology and has specialised in alternative in vivo test systems using zebrafish early-life stages in combination with toxicogenomics, morphometry, live imaging and behavioural assessments.

In Vitro, In Vivo, Screening, toxicology