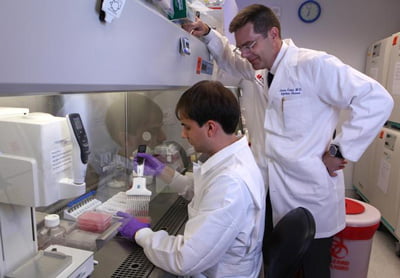 Researchers at Vanderbilt University Medical Centre and the University of Texas Medical Branch in Galveston (UTMB) have isolated human monoclonal antibodies from Ebola survivors which can neutralise multiple species of the virus.

“We thought we would need five different sets of vaccines or five different (drugs),” said James Crowe Jr., M.D., the Ann Scott Carrell Professor and director of the Vanderbilt Vaccine Centre, who led Vanderbilt’s end of the research.

“This work suggests there are common elements across different groups of Ebola viruses,” Crowe said. “Maybe we can come up with one therapeutic or one vaccine that would solve all of them.”

“In this study, a remarkably diverse array of virus-specific antibodies was isolated, which appeared to bind to various parts of the envelope protein of the virus,” said UTMB professor Alexander Bukreyev, Ph.D., who led the UTMB team.

“Some of the antibodies neutralised not only Ebola Bundibugyo virus, but also Ebola Sudan virus and Ebola Zaire virus, similar to that which caused the recent outbreak in West Africa,” Bukreyev said.

Monoclonal antibodies are generated by clones of a type of white blood cell that have been fused to myeloma cells to form fast-growing “hybridomas.” Like heat-seeking missiles, they seek out and destroy their targets, in this case, the Ebola virus. Unlike vaccines, antibody treatments are meant to provide short-term protection to health care workers and others at risk of exposure. They also could be used as antiviral drugs to treat patients who are already infected with Ebola virus.

One of the antibodies protected guinea pigs in a challenge study

In the current study, Vanderbilt researchers led by graduate student Andrew Flyak used a high-efficiency method they developed to quickly isolate and generate large quantities of monoclonal human antibodies from the blood of survivors of a 2007 outbreak in Uganda who were infected by the Bundibugyo Ebola virus.

Components of the study, which require work with live viruses, were performed by Bukreyev’s team at the Galveston National Laboratory at UTMB, which has biosafety facilities capable of handling Ebolaviruses safely.

In addition to neutralizing multiple Ebolavirus species, one of the antibodies also protected guinea pigs from a lethal challenge of virus.

“From the human antibody work … and the vaccine work that’s being done, it’s clear we can find a protective strategy for Ebola,” he said. “That’s a big step forward.”