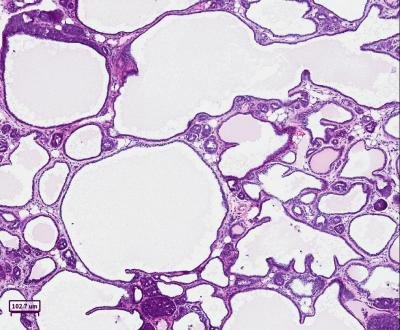 A team at Cold Spring Harbor Laboratory (CSHL) has announced preclinical data suggesting the promise of a novel drug directed against a novel target in malignant mammary tumours.

Although the work is at the first stage of development, it excites team leader David L. Spector, Ph.D., because in mouse models of human metastatic breast cancer it has produced “differentiation of an aggressive primary tumour, redirecting it from a highly proliferative state, and reducing its metastatic activity by 70 percent.”

The target is called Malat1. It is a member of an understudied class of nucleic acids that biologists call long non-coding RNAs (lncRNAs). Malat1’s function in cells has not yet been determined but for over a decade it has been known to have unusual qualities, compared with other long non-coding RNAs localised in the cell nucleus.

In addition to its especially long length, Malat1 was found to be among the most abundant lncRNAs. As Spector observes, “it takes a great deal of energy for cells to make large quantities of this RNA, so we tend to assume it is doing something important.” The argument is augmented by a series of findings demonstrating that Malat1 is even more abundant than usual in some classes of malignant tumour cells.

In an earlier study, Spector’s team knocked out the Malat1 gene in mice and curiously, these mice had no apparent abnormalities, a fact that would seem improbable if Malat1 did in fact have an important function. Spector, however, was intrigued by earlier reports of the upregulation of the RNA in certain cancers. Therefore, his team, led by postdoctoral fellow Gayatri Arun, set out to discover what would happen if mice that model human metastatic breast cancer were bred with the mice lacking Malat1.

“We got an amazing result,” Spector says. “By removing Malat1 — this one, single long non-coding RNA — we made a dramatic impact on the primary breast tumours in these mice. The tumours took on a wholly new character.” Aggressive breast cancer tumours differentiated and took on cyst-like characteristics. They filled with fluid, which, the team noted, contained various proteins including milk proteins, demonstrating that some of the tumour cells had differentiated. Just as important, in these mice lacking Malat1, there was nearly no metastasis.

Next, Spector and colleagues considered was how to design a drug that would mimic the effects of knocking out the Malat1 gene. Perhaps, they reasoned, such a drug might produce some of the remarkable therapeutic effects seen in the knock-out mice.

In collaboration with Ionis Pharmaceuticals they utilised an ASO – an antisense oligonucleotide – a nucleic acid designed by virtue of its complementary nucleotide sequence to bind to the Malat1 lncRNA at a precise location. The ASO-Malat1 hybrid stimulates a naturally occurring cellular enzyme that degrades the Malat1 lncRNA. When treated with an antisense drug that specifically targets and reduces levels of Malat1, breast cancer tumors in mice were observed to undergo a change of character. CREDIT: Spector Lab, CSHL

The ASO was administered to a line of mice that mimicked human metastatic breast cancer. Although these mice had an active Malat1 gene, its RNA was degraded in animals that were treated with the Malat1 ASO. As in the knock-out mice, aggressive tumours failed to thrive and were reduced to low-grade tumours looking more like cysts; metastasis, while not completely abolished as in the knock-out mice, was reduced some 70 percent.

The team conducted additional experiments in which mouse breast tumours were sampled to generate so-called organoids – spheres of cells that grow in three-dimensional culture. The organoids were used to further explore Malat1’s role in breast cancer cells. These experiments, led by postdoctoral fellows Gayatri Arun and Sarah Diermeier, indicated Malat1 “is touching multiple nodes – gene programmes that determine what cells do.” In aggressive cancer cells with Malat1 knocked out completely, or degraded by the ASO treatment, the organoids are no longer highly active; they stop moving and pack tightly together – suggesting, perhaps, how targeting Malat1 reduces metastatic potential.