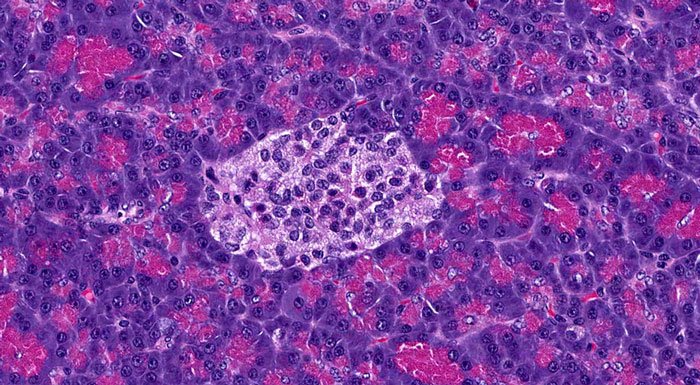 Scientists have discovered that the onset of type 1 diabetes is preceded by modification of MAIT lymphocytes. These cells—associated with mucosae and able to recognise elements of the microbiota—could, therefore, serve as new biomarkers for early detection and prevention of the illness.

Type 1 diabetes (T1D) is an autoimmune disease that develops when the immune system attacks beta cells in the pancreas. This destructive process is often attributed to autoreactive T lymphocytes. Yet the innate immune system, our body’s first line of defence, also plays an important role in this disease. MAIT cells associated with the mucosae are an integral part of this front-line immunity.

They are activated by bacteria—especially those of the intestinal flora, or gut microbiota. The research team wondered what role MAIT cells played in the T1D-related disturbance of this flora and of gut mucosal homeostasis.

Investigations, led by Agnès Lehuen relied on T1D animal models studied by her team at the Cohin Institute as well as blood samples from patients under the care of Dr Jacques Beltrand from the Necker–Enfants Malades Hospital.

Findings for both the samples and the animal models showed that MAIT cells are altered before T1D develops.

When T1D is diagnosed in children, the number of MAIT cells in their blood is lower than in nondiabetic children. Migration of MAIT cells to inflamed pancreatic tissue in T1D patients could explain the discrepancy.

This is a very reasonable assumption since the pancreatic population of MAIT cells swells in non-obese diabetic (NOD) mice. (NOD mice develop a form of diabetes very similar to the human disease.) Furthermore, experiments performed by the researchers on human cells in vitro and on NOD mice suggest MAIT cells are directly linked to the destruction of pancreatic beta cells.

In addition to changes in their concentration and location within the body, it appears that a functional defect in MAIT cells is linked to the modifications of the gut mucosa seen in T1D patients.

Indeed, a normal function of MAIT cells is to maintain the homeostasis of this mucosa.

This capacity is compromised in T1D, making the gut mucosa permeable to bacteria, which, in turn, favours an autoimmune response. Ongoing research seeks to better understand the links between MAIT cells and the gut microbiota.

The team’s discovery could lead to the development of new strategies for T1D treatment.

Most importantly, we now know that MAIT cells are early biomarkers for this form of diabetes because they undergo changes before the disease develops. Their use as such should improve T1D prevention.

INSERM Transfert has filed a patent in connection with these findings, on behalf of INSERM, the CNRS, and Paris Descartes University.

The researchers’ findings are published in Nature Immunology.

Endosomal trafficking could be a target for Alzheimer’s therapies