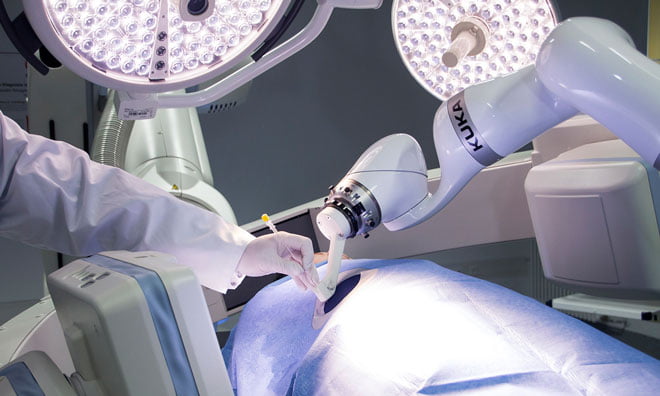 Finding the ideal position for interventional needles – as used in biopsies – is a difficult and time-consuming process that can now be performed automatically, using a robotic arm to place a needle guide for the doctor at the optimal insertion point. With robotic assistance, doctors need five minutes to position the needle, as opposed to 30 minutes with conventional techniques.

An ultrasound shows a shadow on the liver – but is it a tumour? Often, the only way to conclusively answer this question is to perform a biopsy, to send the suspected tissue to a laboratory for testing.

However, placing the biopsy needle with precision is far from easy. On one hand, the doctor needs to be sure of reaching the suspected tissue – and not healthy tissue just millimetres to the side. On the other hand, the needle must not damage veins, nerve pathways, and organs such as the lungs, and cannot penetrate bony structures such as ribs. To obtain an overview, doctors begin by performing a computed tomography scan, which they use to manoeuvre the needle to the correct position. The same challenges arise in treatments that use needles to direct heating, cooling, or high-energy beams into the cancerous tissue, thereby destroying the tumour.

“Whereas humans struggle to position this sort of needle, it’s hard to beat a robot designed for the purpose,” says Andreas Rothfuss, a researcher at the PAMB.

“Our system removes burdens for doctors while leaving them in control.”

In other words, the robot does what it does best – locating the right path and positioning the needle guide so that there is no risk of hitting or injuring either doctor or patient. Thereafter, the doctor again takes command and inserts the needle into the tissue.

“A human needs 30 minutes to position the needle, but with robot assistance this is cut down to five minutes at most,” says Rothfuss.

To begin the procedure, the doctor begins by performing a computed tomography scan of the patient. This time, however, the robot arm accompanies the scan using a calibration tool to determine the ideal position to target a specific point in the image.

Software from Fraunhofer MEVIS analyses the image and supports the doctor in placing the virtual needle by displaying the needle in the image. If, instead of a biopsy, the doctor is administering treatment – seeking to destroy a tumour by applying heat, for instance – the software simulates how the heat will spread through the tissue.

The last step is to determine the number of needles and their positions required to kill off the entire tumour. Thereafter, the robot arm’s calibration tool is replaced with a needle guide. The robot transports the guide to the calculated position and places it on the skin at the correct angle. However, it does not insert the needle itself: this is left to the doctor, who pushes the needle into the tissue step by step through the needle guide held in place by the robot.

To ensure that the needle is in the planned position, doctors take X-rays as part of the standard procedure as they insert the needle into the tissue. Here, too, the robot offers several advantages. In conventional needle insertion, doctors hold the needle in place manually, obscuring a part of the X-ray. This also exposes doctors’ hands to radiation each time a monitoring image is taken. Now, the robot, impervious to radiation, can hold the needle in place with its needle guide. There is also a significant reduction in the patient’s radiation exposure – the doctor inserts the needle through the guide, eliminating needle slippage. As a result, the number of monitoring X-rays is greatly reduced.

The researchers hope that the system could reach the market in around three years.