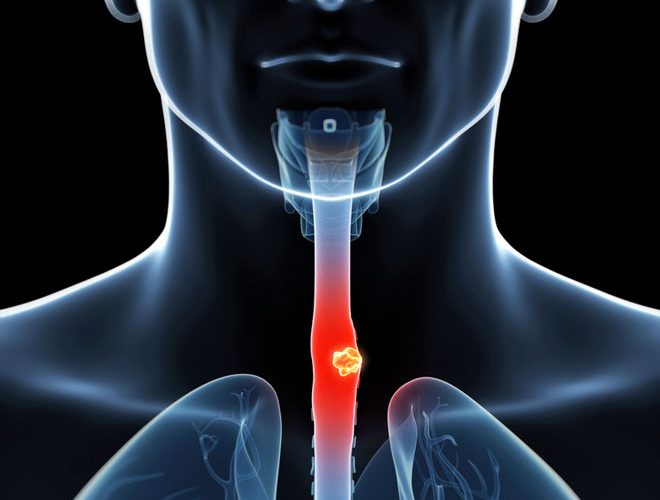 Scientists have developed an endoscope that uses near-infrared light to spot early warning signs of oesophageal cancer. Researchers at the Cancer Research UK Cambridge Institute sprayed a dye on oesophageal tissue samples taken from people with Barrett’s oesophagus – a condition that increases the risk of developing oesophageal cancer, finding that the dye sticks to healthy oesophageal cells but not to pre-cancerous cells.

Researchers had tried this approach before but had used a dye that gave out visible light to spot pre-cancerous cells. Problems arose because when cells are exposed to visible light, they naturally emit visible light themselves – making the distinction between healthy and abnormal cells hard to see.

But, by using a dye that gives out near-infrared light, scientists refined the process so they could make the distinction.

This new technique could be used to monitor people with Barrett’s oesophagus who have an increased risk of developing oesophageal cancer, and spot early signs that cancer might be developing before the person has any symptoms.

“People who are at a high risk of developing oesophageal cancer, such as those with Barrett’s oesophagus, could be closely monitored with this technique. And removing patches of pre-cancerous cells could prevent some cases of oesophageal cancer. But we need to do some further testing before clinical trials with patients can be set up to see how effective the approach could be at saving lives.”

Dr Emma Smith, Cancer Research UK, said, “Early detection is crucial if we want to cure more cancers and save more lives. And oesophageal cancer is often caught at an advanced stage, meaning survival rates of the disease have remained stubbornly low.”

“We urgently need new ways to detect the disease early. This development could lead to a cheaper and better way of detecting the warning signs of oesophageal cancer and even stop some people developing the disease.”