Researchers from the Instituto Gulbenkian de Ciência, Portugal, have discovered that the key controller of trunk, tail and spinal development is the Oct4 gene, one of the essential regulators of stem cells. The team intend to use their data to open new avenues to the study of spinal cord regeneration… 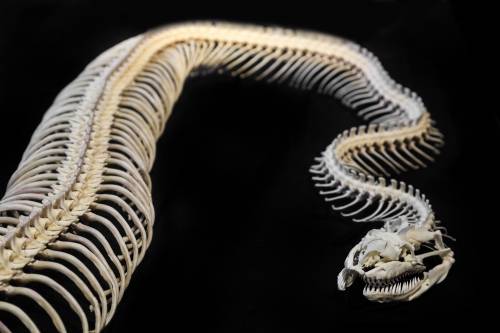 Researchers from the Instituto Gulbenkian de Ciência, Portugal, studied mice and snakes and discovered that the key controller of trunk, tail and spinal development is the Oct4 gene, one of the essential regulators of stem cells. The team intend to use their data to open new avenues to the study of spinal cord regeneration.

Vertebrates exhibit a remarkably broad variation in trunk lengths. However, the evolutionary and developmental origins of this diversity remain largely unknown.

Despite obvious differences in size and shapes observed among different vertebrate animals, they all have bodies with a head and neck, a trunk and a tail. It is the relative size of each of these body sections what makes a large part of the body differences among these animals. Still, all vertebrates develop by consecutive phases, forming each region of the body in a specific order, from head to tail. The development is guided by genetic instructions that inform the beginning and the end of each body region’s formation. In order to crack this genetic code, the team studied mice that had particularly long or especially short trunks.

“We thought that the analysis of these animals could give us the key to unveil the code of trunk formation”, says Moisés Mallo, who led the team.

Since many other vertebrates also have Oct4, this gene could play similar roles in other animals and might even be responsible for the exceptionally long trunks of snakes. Rita Aires explains: “We had found that Oct4 is the switch that leads to trunk formation, still we couldn’t explain the different trunk length observed in vertebrates, particularly in snakes. Therefore, we tested if this switch was being turned on or off during different periods of embryonic development in snakes compared to mice.”

The researchers discovered that the Oct4 gene was indeed kept active during a longer period of time in snakes when compared to other animals. They also showed that this resulted from changes in the snake genome that happened during reptile evolution, which placed the Oct4 gene next to a DNA region that keeps this gene in an “ON” state during long periods of embryonic development.

“The formation of different body regions works as a strong-arm contest of genes. Genes involved in trunk formation need to start ceasing activity so that the genes involved in tail formation can start working. In the case of snakes, we observed that the Oct4 gene is kept active during a longer period of embryonic development, which explains why snakes have such a long trunk and a very short tail”, says Aires.

Moisés Mallo explains, “We identified a key factor that allows essentially unlimited growth of trunk structures, as long as it remains active. Now we will investigate if we can use the Oct4 gene and the DNA region that maintains its activity to expand the cells that make the spinal cord, trying to regenerate it in case of injury.”

To find out how the Mexican salamander holds the key to limb regeneration, click here!