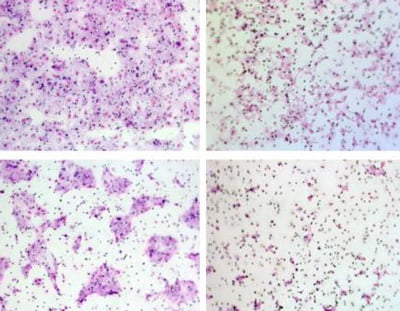 The team shows what happens when FER is rendered inactive in various kinds of ovarian cancer cells grown in culture. The left panel (A) shows motility; the right panel (B) invasiveness. CREDIT: Tonks Lab, CSHL/Genes&Development

Gaofeng Fan, Professor Nicholas K. Tonks and colleagues have found a previously undiscovered pathway through which ovarian cells can be transformed into cancer cells. They scientists say the pathway provides an excellent opportunity for targeting by new drugs. In addition, when combined with others now in development, these new drugs may be able to stave off metastatic disease.

According to the scientists, the pathway depends on activity of a protein called FER. In initial experiments, Fan and the team demonstrated that FER is both upregulated in ovarian cancer cells, and, they say, responsible for the elevated motility and invasiveness of such cells.

The key discovery made by the CSHL team is that FER is able to activate a receptor on the surface of ovarian cells by interacting with a portion of the receptor that penetrates the cell membrane and plunges into the cytoplasm. The receptor, called MET, is typically activated when a growth factor called HGF binds it at the cell surface. The researchers say MET is overexpressed in up to 60% of ovarian tumours and its activation has been implicated in both cancer initiation and in advanced cancers with poor prognosis.

MET is the target of a number of drug development efforts but so far, candidate MET inhibitors have had weak anti-tumour effects when administered alone.

The significance of Fan and Tonks’ research on FER is their discovery of how FER activates MET from below. They call this form of activation “non-ligand-dependent”. The researchers traced the pathway through which FER’s binding to MET inside the cell sets off a cascade of cell-signalling events, all directly connected in prior research with cancer initiation, including RAC1/PAK1 and SHP2-ERK. Three mice with similar primary ovarian tumours are shown prior to surgery (top row) and following surgery (middle and bottom rows). A metastasis of the primary tumour appears in a lung of the mouse in the left column. FER was active in this mouse. CREDIT: Tonks Lab, CSHL/Genes&Development

“We showed FER was essential for ovarian cancer cell motility and invasiveness, both in vitro and in vivo,” Tonks explained. “Considering that frequent amplification of MET accounts for resistance to therapies now in development and to poor prognosis, not only in ovarian cancer but in other cancers too, our findings pinpoint an important new signalling hub, involving the role of FER in MET activation. This may provide a novel strategy for therapeutic intervention, perhaps a drug to suppress FER being administered along with a MET inhibitor.”