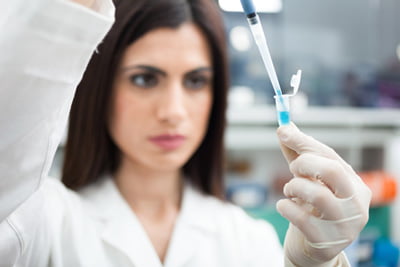 MIT engineers have developed a new type of easily customisable vaccine that can be manufactured in one week.

So far, they have designed vaccines against Ebola, H1N1 influenza, and Toxoplasma gondii, which were 100 percent effective in tests in mice.

The vaccine consists of strands of messenger RNA, which can be designed to code for any viral, bacterial, or parasitic protein. These molecules are then packaged into a molecule that delivers the RNA into cells, where it is translated into proteins that provoke an immune response from the host.

In addition to targeting infectious diseases, the researchers are using this approach to create cancer vaccines that would teach the immune system to recognise and destroy tumours.

Daniel Anderson, an associate professor in MIT’s Department of Chemical Engineering, explained more: “This nanoformulation approach allows us to make vaccines against new diseases in only seven days, allowing the potential to deal with sudden outbreaks or make rapid modifications and improvements.”

The project to develop the vaccines was led by Jasdave Chahal, a postdoc at MIT’s Whitehead Institute for Biomedical Research, and Omar Khan, a postdoc at the Koch Institute.

Most traditional vaccines consist of an inactivated form of a virus or other pathogen. These vaccines usually take a long time to manufacture, and for some diseases they are too risky. Other vaccines consist of proteins normally produced by the microbe, but these don’t always induce a strong immune response, requiring researchers to seek an adjuvant.

RNA vaccines are appealing because they induce host cells to produce many copies of the proteins they encode, which provokes a stronger immune reaction than if the proteins were given on their own. The idea of using messenger RNA molecules as vaccines has been around for about 30 years, but one of the major obstacles has been finding a safe and effective way to deliver them.

Khan decided to package RNA vaccines into a nanoparticle made from a branched molecule known as a dendrimer. One key advantage of this material is that the researchers can give it a temporary positive charge, which allows it to form close associations with RNA, which is negatively charged. Khan can also control the size and pattern of the final structure. By inducing the dendrimer-RNA structure to fold over itself many times, Khan generated spherical vaccine particles with a diameter of about 150 nanometres. That makes them of similar size as many viruses, enabling the particles to enter cells by exploiting the same surface proteins that viruses use for this purpose.

By customising the RNA sequences, the researchers can design vaccines that produce nearly any protein they want. The RNA molecules also include instructions for amplification of the RNA, so that the cell will produce even more of the protein.

The vaccine is designed to be delivered by intramuscular injection, making it easy to administer. Once the particles get into cells, the RNA is translated into proteins that are released and stimulate the immune system. Significantly, the vaccines were able to stimulate both arms of the immune system – a T cell response and an antibody response.

In tests in mice, animals that received a single dose of one of the vaccines showed no symptoms following exposure to the real pathogen — Ebola, H1N1 influenza, or Toxoplasma gondii.

“No matter what antigen we picked, we were able to drive the full antibody and T cell responses,” Khan says.

The researchers also believe that their vaccines would be safer than DNA vaccines because unlike DNA, RNA cannot be integrated into the host genome and cause mutations.

One response to “Programmable RNA vaccines effective against Ebola and influenza”