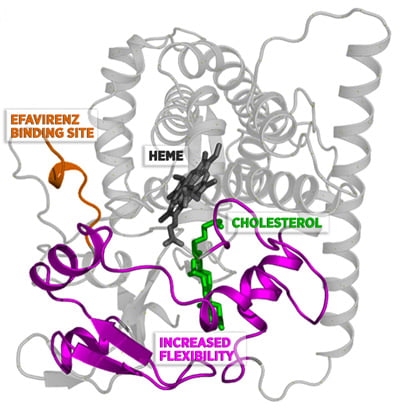 When efavirenz binds to CYP46A1 at the site shown in orange, it increases the flexibility of the protein in the region (magenta) around cholesterol (green). CREDIT: Kyle Anderson/NIST

Scientists from the National Institute of Standards of Technology (NIST) have identified a promising pathway to treating patients with Alzheimer’s disease.

The target pinpointed by the NIST scientists is where an approved anti-HIV drug – efavirenz – latches to the enzyme already responsible for about 80 percent of the cholesterol elimination from the human brain. Obtained with a cutting-edge atom-substitution technology called hydrogen-deuterium exchange (HDX), the molecular roadmap shows how small amounts of the drug can kick the enzyme, called CYP46A1, into higher gear.

With this information, a team led by Irina Pikuleva of Case Western Reserve University now has the full story behind the drug’s mechanism of action, key evidence in their proposal to launch clinical trials of efavirenz as an Alzheimer’s treatment.

Analyses of NIST’s HDX data and follow-on experiments helped to explain why, in studies of mice, tiny doses of efavirenz ramped up CYP46A1’s cholesterol-removal capability while larger doses had an inhibiting effect.

The explanation: At low doses, efavirenz binds to a site on the enzyme that boosts cholesterol breakdown at another location on the enzyme, an increase enabled by changes in shape initiated by the drug. At higher doses, however, drug molecules begin to compete with cholesterol for the same site where cholesterol normally binds.

The shape-changing effect of efavirenz “is a classic example of a basic tenet of biology – structure determines function,” Pikuleva said. And the effect can be dramatic.

A 40% increase in cholesterol breakdown

In mouse studies, the enzyme-drug connection triggered a 40 percent increase in cholesterol breakdown and removal from the brain. In people, the boost is likely to be significantly higher, Pikuleva said, since the enzyme plays a larger disposal role in the human brain than in the mouse’s.

Studies of over the past 15 years persuaded Pikuleva’s team to pursue an Alzheimer’s treatment strategy focused on ratcheting up the cholesterol-clearing capabilities of CYP46A1.

Studies by other scientists that used genetic manipulations in mouse models of Alzheimer’s disease showed that cranking up CYP46A1’s activity reduced development of plaque, or clumps of protein pieces called beta amyloids. These studies also reported improvements in memory and learning. And, even in plaque-free, normal mice, increased cholesterol removal resulted in memory improvement.

Conversely, mouse studies also found that suppressing CYP46A1 led to learning deficiencies. Focusing on efavirenz as part of its strategy to “repurpose” already-approved drugs, the Case Western team set out to uncover how the drug stimulates the enzyme’s activity. Computational simulations and modelling suggested more than 30 locations on the enzyme where efavirenz molecule might bind.

Seeking to narrow down the options, Pikuleva turned to Kyle Anderson and colleagues at the Institute for Bioscience and Biotechnology Research, a partnership between NIST and the University of Maryland.

The NIST team used HDX to compare and contrast CYP46A1 in four different states: alone, with cholesterol only, with efavirenz only, and with cholesterol and efavirenz. Subsequent analyses of the resulting torrents of experimental data revealed not only where the drug attached to the enzyme but also how the cholesterol-binding site adjusted in response. The structural changes enabled CYP46A1 to bind cholesterol molecules more tightly than in the absence of the drug.

Following up with a study using a different method, Pikuleva’s team further confirmed the site of efavirenz binding as determined with HDX. The evidence strongly suggests, she said, at doses a hundred times lower than prescribed for treating HIV, efavirenz might be an effective therapy for stimulating cholesterol turnover from the brain and slowing or preventing Alzheimer’s disease.