MAIT cells found to have a role against viruses

Mucosal associated invariant T-cells (MAIT cells) could be twice as important as previously thought, according to Oxford University researchers… 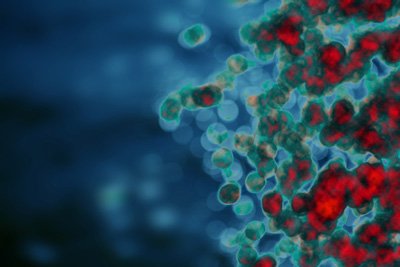 Mucosal associated invariant T-cells (MAIT cells) could be twice as important as previously thought, according to a study from Oxford University researchers.

Researcher Bonnie van Wilgenburg said: “MAIT cells are unlike any other part of the immune system because they are multipurpose, rather than responding to particular pathogens – the various bacteria, viruses and other microorganism that can cause disease.”

Standard T-cells possess specific receptors on their surface, each of which allows them to recognise a different pathogen. Most T-cells have a large range of such receptors to cover all pathogens. One receptor can recognise one particular pathogen infection, while another will be activated by a different pathogen. MAIT cells have only a few receptors because they do not recognise specific pathogens. Instead they recognise a chemical made by many different pathogens. Researchers in Melbourne identified this chemical: a small molecule called 5-A-RU, which is made by the majority of bacteria. In effect this makes MAIT cell receptors multi-purpose – spotting a whole category of bugs rather than just a set of individual ones.

Now, the team have discovered that MAIT cells are even more multi-purpose than that.

Professor Paul Klenerman explained: “We found that MAIT cells are readily activated by cytokines, chemical messengers released by the human body in response to infections.”

A “Swiss army knife” for the immune system

Prof Klenerman continued: “Most human T-cells require their specific receptor to be triggered in order to react, but MAIT cells can bypass this and will be strongly and specifically activated in response to a combination of cytokines.

“In our latest study we discovered that viruses, not just bacteria, can activate the immune system to produce this specific mix of cytokines that activates MAIT cells. By studying people with different viral infections, including flu, dengue and hepatitis C, we found evidence that MAIT cell activation occurs during human viral infection.

“This is the first time that MAIT cells have been observed having a role in the immune response to viruses. This opens up the exciting possibility that MAIT cells could be involved in the defence against viruses or reduce their damaging effects.

“The discovery suggests that MAIT cells are a ‘Swiss army knife’ for the immune system – useful against all sorts of bacterial and viral infections.”

The researchers say the discovery may also have implications for vaccine and treatment design.