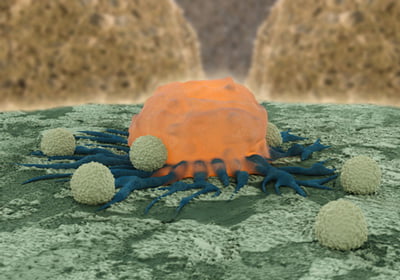 Researchers have described how an antibody that recognises the combination of a known cancer-associated surface protein and a cancer-associated carbohydrate can be applied as a chimeric antigen receptor (CAR)-based therapy for a wide range of solid tumours.

The team from the Perelman School of Medicine at the University of Pennsylvania demonstrated the new CARs’ effectiveness in mouse models of pancreatic cancer.

“We engineered T cells to target a cancer-associated surface protein with shortened carbohydrate molecules,” said Avery Posey, PhD, an instructor in Pathology and Laboratory Medicine. “Future cancer immunotherapies combining the targeting of cancer-specific carbohydrates and cancer proteins may lead to the development of incredibly effective and safe new therapies for patients. These engineered cells will be able to increase cancer specificity of this immunotherapy and decrease the potential for toxicity in patients.”

In general, CAR T cell therapy involves collecting T cells from a patient’s blood through a process similar to dialysis and engineering them to express cell-surface proteins that recognise specific molecules on the surface of cancer cells. The modified T cells are then given back to the patient to target and kill those cancer cells.

Posey, along with Laura Johnson, PhD, Carl June, MD, and colleagues from the University of Copenhagen and University of Chicago, developed CAR T cells that express an antibody that specifically recognises truncated carbohydrate molecules on a mucin 1 (MUC1) protein, which is absent on normal cells but abundant on cancer cells of many types of solid tumours and leukaemias.

When these CAR T cells were injected into mice with leukaemia or pancreatic cancer, the tumours shrank, and were even eliminated in most animals, resulting in increased survival. The mice with pancreatic cancer were still alive 113 days after treatment with the CAR T cells; however, only one-third of the animals treated with CAR T cells that did not target the MUCI proteins with the truncated carbohydrate survived until the end of the experiment. Importantly, the CAR T cells could not damage normal human cells or cells without the abnormal carbohydrate.

In addition, demonstrating through high-powered microscopy that normal cells express the immature, cancer-related version of the MUC1 protein only inside the cell while cancer cells shuttle the abnormal protein to the cell surface, was helpful to show why these CAR T cells can only recognise the cancer-specific protein on tumours.

These findings suggest that targeting abnormal, cancer-specific carbohydrates on proteins found in normal tissues and solid tumours could become a new immunotherapy for solid cancers.