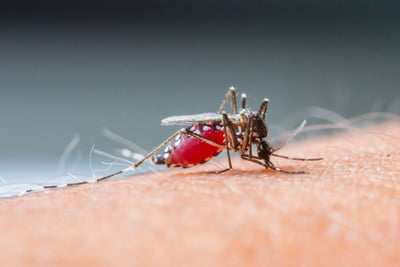 The study, led by the University of Leeds, found that inflammation where the insect has bitten helps a virus establish an infection in the body more quickly and also helps it to spread around the body, increasing the likelihood of severe illness.

“Mosquito bites are not just annoying – they are key for how these viruses spread around your body and cause disease,” said Dr Clive McKimmie, a research fellow at the School of Medicine. “We now want to look at whether medications such as anti-inflammatory creams can stop the virus establishing an infection if used quickly enough after the bite inflammation appears.”

In the new research, the investigators used mouse models to study the bites of the Aedes aegypti mosquito, the species that spreads infections such as Zika, dengue and Chikungunya.

When a mosquito bites, it injects saliva into the skin. The saliva triggers an immune response in which white blood cells called neutrophils and myeloid cells rush to the site. But instead of helping, some of these cells get infected and inadvertently replicate the virus, the researchers found.

Viruses failed to replicate in the absence of inflammation

The team injected viruses into the skin of the mice with or without the presence of a mosquito bite at the injection site and compared the reaction. In the absence of mosquito bites and their accompanying inflammation, the viruses failed to replicate well, whereas the presence of a bite resulted in a high virus level in the skin.

“This was a big surprise we didn’t expect,” said Dr McKimmie. “These viruses are not known for infecting immune cells.

“And sure enough, when we stopped these immune cells coming in, the bite did not enhance the infection anymore.”

“This research could be the first step in repurposing commonly available anti-inflammatory drugs to treat bite inflammation before any symptoms set in”, added Dr McKimmie.

He explained that if it is proven to be effective, this approach could work against a multitude of other viruses.