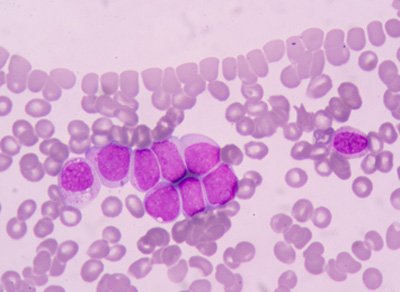 In a research project as part of the German Cancer Consortium (DKTK), researchers at the Department of Internal Medicine 3, Munich University Hospital (LMU), have discovered a new mutation that promotes the growth of acute myeloid leukaemia (AML) cells.

The mutation in the ZBTB7A gene boosts the energy metabolism in the cells.

“In healthy cells, the active ZBTB7A gene acts like a parking brake on metabolism,” said Philipp Greif, who leads the DKTK Pathogenesis of Acute Myeloid Leukaemia Group at LMU. “If the gene is defective, cancer cells get more energy to use for proliferation.”

The scientists were able to show that the growth rate of leukaemia cells can be reduced by genetically modifying the cancer cells in such a way that they produce higher levels of active ZBTB7A. The investigators also observed an indication of the gene’s growth-inhibiting effect in the clinic: Leukaemia patients in whose cancer cells the gene was transcribed at higher levels had significantly better chances of survival than patients in whom the gene was hardly active or not active at all.

Philipp Greif is one of the clinical researchers at the DKTK who are trying to find new, more targeted approaches in the treatment of cancer patients. “Assessing the course of the disease using genetic markers helps us recommend the right therapy,” Greif said. “In some cases, the leukaemia may be curable with chemotherapy alone, while in others, subsequent stem cell transplantation is the only chance for the patients to be cured.”

Using the available sample material at the LMU Laboratory for Leukaemia Diagnostics and the collections at the other DKTK sites, the scientists now plan to explore whether the new marker can be used to customise therapies for individual patients.

The discovery is also a promising starting point for developing new approaches toward treating AML patients.

“It might be possible to use specially modified glucose molecules to block the energy production process in AML cells,” said Luise Hartmann. “Initial clinical trials in other cancers have already shown that these agents are well tolerated by patients.”

About a quarter of all leukaemia patients with the t(8;21) chromosomal abnormality display the mutated ZBTB7A gene. But the scientists also observed a clear link between the gene’s activity and the course of the disease in leukaemia patients in whose cancer cells no mutations in the ZBTB7A gene were detected.

“Therapy with the metabolic inhibitor might therefore work in a wider circle of patients,” Greif said. This approach might also be viable for other types of cancer where ZBTB7A mutations occur.