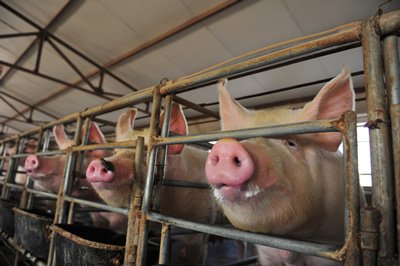 The BBC has reported that scientists from UC Davis have injected human stem cells into pig embryos to produce human-pig chimeras in a bid to develop organs for transplants.

The broadcaster’s Panorama was given access to the research for its upcoming ‘Medicine’s Big Breakthrough: Editing Your Genes’ programme.

According to the BBC, UC Davis scientists use CRISPR gene editing to remove DNA from a newly fertilised pig embryo that would enable the resulting foetus to grow a pancreas. Human induced pluripotent (iPS) stem cells are then injected into the embryo. The team at UC Davis hopes the human stem cells will take advantage of the genetic niche left by the CRISPR gene editing in the pig embryo and the resulting foetus will grow a human pancreas.

Pablo Ross, a reproductive biologist at UC Davis, told the BBC: “Our hope is that this pig embryo will develop normally but the pancreas will be made almost exclusively out of human cells and could be compatible with a patient for transplantation.”

However, the work is controversial. Only last year, the US National Institutes of Health (NIH) said it would not fund research in which human pluripotent cells are introduced into non-human vertebrate animal pre-gastrulation stage embryos. The NIH said it would like to undertake a deliberative process to evaluate the state of the science in this area, the ethical issues that should be considered, and the relevant animal welfare concerns associated with these types of studies before funding would be allowed.

The main concern, as highlighted by the BBC, is that the human cells might migrate to the developing pig’s brain, potentially making the pig “more human”. Commenting to the BBC, Pablo Ross says while this is unlikely, the research is proceeding with caution: “We think there is very low potential for a human brain to grow, but this is something we will be investigating.”