Posted: 27 May 2016 | Victoria White, Digital Content Producer | No comments yet

By increasing the level of miR-374b, researchers have restored chemotherapy sensitivity to pancreatic cancer cells that had developed resistance… 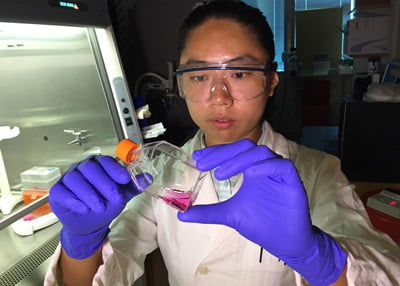 By increasing the level of a specific microRNA (miRNA), Georgia Institute of Technology researchers have restored chemotherapy sensitivity in vitro to a line of human pancreatic cancer cells that had developed resistance to a common treatment drug.

If the miRNA molecules can be delivered to cells in the human body the technique might one day be used to battle the chemotherapy resistance that often develops during cancer treatment.

The research team identified the miRNA used in the research with a computer algorithm that compared the ability of different miRNAs to control the more than 500 genes that were up-regulated in drug-resistant cancer cells.

“We were specifically interested in what role miRNAs might play in developing drug resistance in these cancer cells,” said John McDonald, a professor in Georgia Tech’s School of Biology and director of its Integrated Cancer Research Centre. “By increasing the levels of the miRNA governing the suite of genes we identified, we increased the cells’ drug sensitivity back to what the baseline had been, essentially undoing the resistance. This would suggest that for patients developing chemotherapy resistance, we might one day be able to use miRNAs to restore the sensitivity of the cancer cells to the drugs.”

Roman Mezencev, a senior research scientist in the McDonald lab, began by exposing a line of pancreatic cancer cells (BxPC3) to increasing levels of the chemotherapy drug cisplatin. After each in vitro treatment, surviving cells were allowed to proliferate before being exposed to a higher level of the drug. After approximately a year and 20 treatment cycles, the resulting cell line had a resistance to cisplatin that was 15 times greater than that of the original cancer cells.

The next step was to study the genetic changes associated with the resistance, comparing levels of more than 2,000 miRNAs in the cisplatin-resistant line to the original cell line that had not been exposed to the drug. Using a hidden Markov model (HMM) algorithm, they found 57 miRNAs that were either up-regulated or down-regulated, and identified miR-374b as the molecule most likely to be controlling the genes that govern chemotherapy resistance.

While previous work by other researchers has shown that miRNAs can provide a mechanism for the development of drug resistance, the Georgia Tech team took the findings a step farther by increasing the expression of miR-374b. When they did, they found that the cells previously resistant to the cisplatin were again sensitive to the drug – almost back to their original levels.

Techniques to control protein expression are already being used in cancer therapy, but McDonald believes there may be benefits in targeting the activity higher up in the process – at the RNA level. Studies by the Georgia Tech team and by other researchers clearly show an association between chemotherapy resistance and changes in levels of certain miRNAs.

“Molecular evolution is a highly efficient process,” McDonald said. “Our evidence suggests that many of the genes regulated by a single microRNA are involved in coordinated cellular functions – in this case, drug resistance. We believe that microRNAs might be particularly good cancer therapeutic agents because when we manipulate them, we are manipulating suites of functionally coordinated genes.”

A next step will be to study the effects of manipulating miRNA levels in animal cancer models. The McDonald research team is currently pursuing this possibility by inserting the microRNAs into tumours using nanoscale hydrogels.