Zika may cause microcephaly by activating TLR3 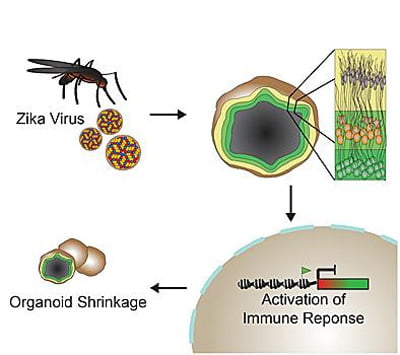 Using a 3D, stem cell-based model of a first-trimester human brain, the team discovered that Zika activates TLR3, a molecule human cells normally use to defend against invading viruses. In turn, hyper-activated TLR3 turns off genes that stem cells need to specialise into brain cells and turns on genes that trigger cell suicide. When the researchers inhibited TLR3, brain cell damage was reduced in this organoid model.

“We all have an innate immune system that evolved specifically to fight off viruses, but here the virus turns that very same defense mechanism against us,” said Tariq Rana, PhD, professor of paediatrics at UC San Diego School of Medicine. “By activating TLR3, the Zika virus blocks genes that tell stem cells to develop into the various parts of the brain. The good news is that we have TLR3 inhibitors that can stop this from happening.”

In the study, Rana’s team first made sure their organoid model was truly representative of the early developing human brain. They found that the model’s stem cells differentiate into the various cells of the brain in the same way that they do in the first trimester of human development. The researchers also compared patterns of gene activation in organoid cells to a database of human brain genetic information. They found that, genetically speaking, their organoid model closely resembled foetal brain tissue at eight to nine weeks post-conception.

When the team added a prototype Zika virus strain to the 3D brain model, the organoid shrank. Five days after the infection, healthy, mock-infected brain organoids had grown an average of 22.6 percent. In contrast, the Zika-infected organoids had decreased in size by an average 16 percent.

Rana’s team also noticed that the TLR3 gene was activated in the Zika virus-infected organoids. TLR3 normally acts as an antenna, sensing double-stranded RNA specific to viruses. When viral RNA binds TLR3, it kicks off an immune response. To do that, the molecule helps activate many different genes that aid in fighting an infection. However, in developing brain cells, the researchers found TLR3 activation also influences 41 genes that add up to a double whammy in this model — diminished stem cell differentiation into brain cells and increased cell suicide, a carefully controlled process known as apoptosis.

To determine whether activation of the molecule could be the cause of Zika-induced organoid shrinkage or merely a symptom of it, Rana’s team treated some of the infected organoids with a TLR3 inhibitor. They found that the TLR3 inhibitor significantly tempered Zika virus’ severe effects on brain cell health and organoid size, underscoring TLR3’s role linking infection and brain damage. However, the treated organoids weren’t perfect. As evidenced by their non-smooth outer surfaces, infected but treated organoids still encountered more cell death and disruption than uninfected organoids.

While promising, this research has been conducted only in human and mouse cells growing in the laboratory thus far. In addition, the Zika virus strain used in this study (MR766) originated in Uganda, while the current Zika outbreak in Latin America involves a slightly different strain that originated in Asia.