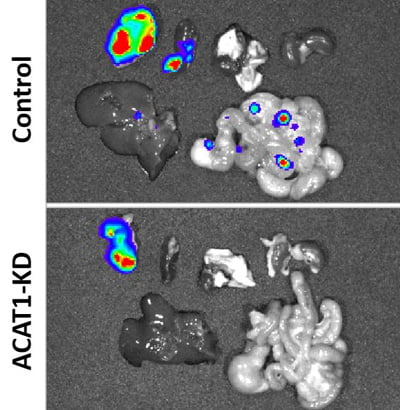 The findings suggest a class of drugs previously developed to treat atherosclerosis could be repurposed for treatment of pancreatic cancer and other forms of cancer. Atherosclerosis is the buildup of fats, cholesterol and other substances in arteries, restricting blood flow.

Findings show that drugs like avasimibe, previously developed for treatment of atherosclerosis, reduced the accumulation of cholesteryl ester. The disease usually kills within a few months of diagnosis. It is hoped the potential new treatment might extend life of pancreatic cancer patients for a year, said Ji-Xin Cheng, a professor in Purdue University’s Weldon School of Biomedical Engineering and Department of Chemistry.

The accumulation of cholesteryl ester is controlled by an enzyme called ACAT-1, and findings correlated a higher expression of the enzyme with a poor survival rate for patients. The researchers analysed tissue samples from pancreatic cancer patients and then tested the drug treatment in a type of laboratory mice referred to as an orthotopic mouse model.

Imaging showed a decrease of the number of lipid droplets, and Raman spectral analysis verified a significant reduction of cholesteryl ester in the lipid droplets, suggesting that avasimibe acted by blocking cholesterol esterification. The drug did not induce weight loss, and there was no apparent organ toxicity in the liver, kidney, lung and spleen, Cheng said.

Findings also showed that blocking storage of cholesteryl ester causes cancer cells to die, specifically due to damage to the endoplasmic reticulum, a workhorse of protein and lipid synthesis.

“By using avasimibe, a potent inhibitor of ACAT-1, we found that pancreatic cancer cells were much more sensitive to ACAT-1 inhibition than normal cells,” he said.

Additional research confirmed that the anti-cancer effect of avasimibe is specific to ACAT-1 inhibition. The researchers performed various biochemical assays and “genetic ablation” to confirm the drug’s anti-cancer effect.

“The results showed that avasimibe treatment for four weeks remarkably suppressed tumour size and largely reduced tumour growth rate,” said Timothy Ratliff, the Robert Wallace Miller Director of Purdue’s Centre for Cancer Research. “Metastatic lesions in lymph nodes and distant organs also were assessed at the end of the study. A much higher number of metastatic lesions in lymph nodes were detected in the control group than the avasimibe-treated group.”

Each mouse in the control group showed at least one metastatic lesion in the liver. In contrast, only three mice in the avasimibe treated group showed single lesion in liver.