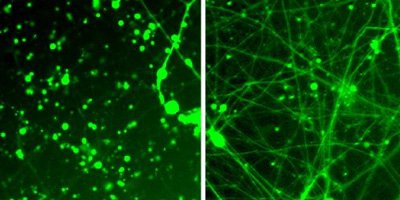 Salk Institute scientists have shown how an FDA-approved drug boosts the health of brain cells by limiting their energy use.

The drug rapamycin prolongs the survival of diseased neurons by forcing them to reduce protein production to conserve cellular energy.

Rapamycin has been shown to extend lifespan and reduce symptoms in a broad range of diseases and, at the cellular level, is known to slow down the rate at which proteins are made. But the new Salk research suggests that rapamycin could also target the neural damage associated with Leigh syndrome, a rare genetic disease, and potentially other forms of neurodegeneration as well.

“Our study shows that protein production in neurons is one of the major utilizers of energy and that neurons of Leigh syndrome degenerate because they can’t sustain a high enough level of energy,” says Tony Hunter, the Renato Dulbecco Chair and American Cancer Society Professor in Salk’s Molecular and Cell Biology Laboratory, who led the research.

Previous studies on rapamycin, which blocks a key energy sensor in cells, found that it can alter the immune system, extend lifespan and treat disorders, including lupus and Alzheimer’s disease. Researchers assumed that the drug prevented the neurodegeneration seen in Alzheimer’s by encouraging cells to degrade damaged components and aggregated proteins. But recent data hinted that the drug might also have an effect on the mitochondria, organelles that act as cells’ powerhouses, producing energy in the form of adenosine triphosphate (ATP).

Xinde Zheng, a research associate in the Hunter lab, was already studying the properties of cells affected by Leigh syndrome, whose inherited neurodegeneration is caused by a mutation in mitochondrial DNA that reduces ATP production. Zheng wondered how rapamycin would affect the neurons plagued by the diseased mitochondria. He and Hunter teamed up with the lab of Rusty Gage, a professor in Salk’s Laboratory of Genetics and holder of the Vi and John Adler Chair for Research on Age-Related Neurodegenerative Disease. Zheng, together with Leah Boyer, then a researcher in Gage’s lab and now director of Salk’s Stem Cell Core, generated diseased neurons by taking skin cells from patients with Leigh syndrome, reprogramming them into stem cells in culture and then coaxing them to develop into brain cells in a dish.

Damaged neurons survived longer when protein production was turned on

Though cells must make proteins to survive, protein production is a highly energy-consuming process and, for diseased cells, the process leaves too few energy reserves to deal with cellular stress or other demands.

“Reducing protein production in aging neurons allows more energy for the cell to put toward folding proteins correctly and handling stress,” says Zheng. “The impact of our finding is that modulation of protein synthesis could be a general approach to treating neurodegeneration.”

In their study, the team found that Leigh Syndrome neurons decayed in the dish and showed clear signs of energy depletion. Meanwhile, Leigh syndrome neurons exposed to rapamycin had more ATP and showed less degeneration. By turning down the dial on protein production, the diseased and damaged neurons were able to survive longer.

“We are surprised and delighted that rapamycin’s effect to reduce protein synthesis as an energy-austerity approach may lead to a potential treatment for mitochondria-related neurodegenerative diseases,” says Gage.

More work is needed to determine whether the findings on rapamycin hold true in animal models of Leigh syndrome and other neurodegenerative diseases, and to ascertain how exactly rapamycin is altering the metabolism of the cells.