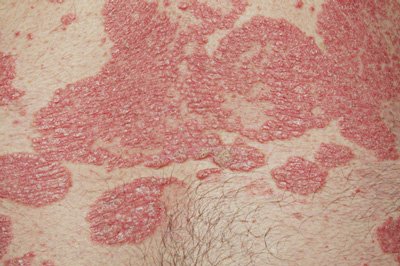 Psoriasis is generally thought to have a genetic origin, which can be further triggered by environmental factors.

People with specific mutations in the CARD14 gene have a high probability of developing psoriasis. A VIB / UGent research team now reveals the molecular signalling mechanism by which mutations in the gene lead to increased inflammation in patients with psoriasis.  Their research could lead to new therapies for psoriasis.

Professor Rudi Beyaert, VIB/UGent, explained: “Our findings raise the interesting possibility that MALT1 inhibitors might be therapeutically beneficial for psoriasis patients with CARD14 mutations. Whether MALT1 inhibitors may also be useful for the treatment of more common forms of psoriasis is currently under investigation.”

Psoriasis is estimated to affect 2-4% of the population of the western world. There is no cure for psoriasis and current treatment only helps to control the symptoms. The underlying mechanism involves the activation of the immune system, resulting in local inflammation and proliferation of skin cells. One of the known genetic factors involved in psoriasis is CARD14. Mutations in this gene increase the ability of the CARD14 protein to activate another protein (NF-?B) that controls the expression of several factors that drive skin inflammation and psoriasis.

Inna Afonina and Elien Van Nuffel under the leadership of Professor Rudi investigated the molecular signalling mechanism by which mutations in CARD14 lead to increased inflammation in psoriasis patients. To do so they focused on keratinocytes, a specific type of skin cells with a key role in psoriasis because of their abnormal growth and ability to produce large amounts of inflammation promoting factors. The research team could show that CARD14 physically and functionally interacts with a protein called MALT1. This interaction activates MALT1 to cleave and inactivate a number of cellular proteins that normally keep the immune system in check. Interestingly, psoriasis-associated mutations in CARD14 enable the formation of hyperactive CARD14/MALT1 complexes, thus leading to abnormally high immune responses and inflammation in patients with psoriasis.

Professor Rudi Beyaert commented: “We found that pharmacological treatment of human skin cells with drugs that inhibit the activity of MALT1 reduced the production of inflammation promoting proteins caused by mutant variants of CARD14. We hope to find an industrial partner to take these promising results a step further in the search for a psoriasis cure.”