‘Are labs too cold for mice?’ researchers ask

Evidence is mounting that even mild chronic cold stress in lab mice is skewing results in studies of cancer, inflammation, and more… 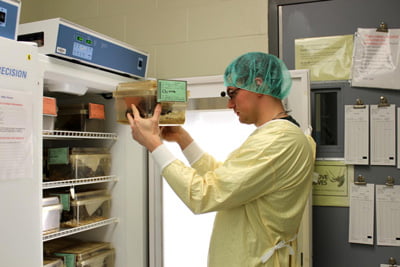 A typical mouse laboratory is kept between 20 and 26 degrees C, but if the mice had it their way, it would be a warm 30 degrees C. New research has found that these cooler temperatures, as well as not being preferable to mice, could be affecting study results.

While the mice are still considered healthy at cooler temperatures, they expend more energy to maintain their core temperature, and evidence is mounting that even mild chronic cold stress is skewing results in studies of cancer, inflammation, and more.

“Most people only look at results from experiments at standard lab temperatures,” says Bonnie Hylander, an immunologist at the Roswell Park Cancer Institute. “They’re not necessarily aware that if you repeat the experiments with mice at a different temperature, you might get a different outcome.”

There are multiple reasons to keep a mouse lab cool. Researchers don gowns, gloves, and masks to work with the animals, which makes the lower temperature more comfortable and also cuts down on the smell. The National Research Council, which publishes guidelines for housing mice, gives the 20-26 degrees C range and recommends that the animals have nesting material. But when mice are constantly trying to generate enough heat to stay warm, the chill causes their heart rate and metabolism to change, and they eat more food to make up the energy.

A few years ago, Hylander and Elizabeth Repasky, an immunologist at the Roswell Park Cancer Institute, along with their colleagues, began investigating the effects of cold stress on the mouse immune system’s ability to fight tumours. As the team revealed in 2013, lab mice do a better job of fighting cancer naturally when they are warm. Tumours grew slower and were less likely to metastasise compared to mice kept at standard lab temperatures. The warmer mice also responded better to chemotherapies.

Concerned about the implications for drug research and selection, Hylander and Repasky started digging into a growing body of research on mouse housing temperature in other fields.

Studies were results differ may be due to environmental conditions

Studies in fields ranging from obesity research to neurobiology have shown that housing temperature can alter study results in mice. “While animal physiologists have recognised the potential of this problem for some time, we were surprised that essentially no work was done on cancer models. We thought it was very important to highlight how many other areas of biomedical research, some related to cancer, are influenced by standard housing temperatures,” says Repasky. “We’re concerned that too many publications in which results differ, either between labs in various countries or within the same lab, may be due to environmental conditions.”

But the answer isn’t necessarily just turning up the thermostats, say the researchers. “Working at a thermoneutral temperature for mice isn’t very pleasant for people,” Hylander says. “It’s hot, and it’s hard for people to work very long when they’re overheated.”

As a first step, Hylander and Repasky recommend that researchers report the ambient temperature used in their colonies and simply be aware that the cage positions, the number of mice per cage, and the type of disease being modelled can influence the degree of cold stress.

For a more direct approach, Hylander suggests that researchers try pilot experiments at warmer temperatures to see how the difference affects experimental outcomes. This could be accomplished by either keeping mice in incubators or giving the animals more nesting material.

Age may be a primary determinant of melanoma treatment resistance