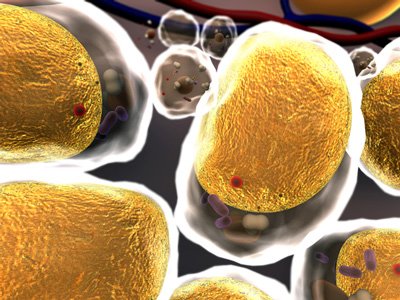 Scientists have kick-started the natural process by which genetically predisposed obese mice gain weight, opening up a new potential approach to fight off obesity.

The study suggests that impaired brown adipose tissue (BAT), otherwise known as ‘brown fat’, drives obesity, and by stimulating heat production in this fatty tissue, weight-management and glucose tolerance can be improved.

“The results of our study show that certain cellular impairments found in one’s metabolic make-up increases the likelihood of obesity and the associated issues, such as diabetes and high blood pressure,” said Laurence Poekes, Université Catholique de Louvain, Bruxelles, Belgium. “By intervening to reverse such impairments using a mouse model, we believe effective therapeutic strategies could be developed to combat obesity and associated comorbidities.”

In the study, male foz/foz mice were studied as they are prone to developing metabolic syndrome, which is characterised by obesity, high blood pressure and diabetes. The foz/foz mice were studied alongside wild-type mice, that do not have the same metabolic predisposition.3 Metabolic syndrome in foz/foz mice was associated to impaired thermogenesis in BAT in response to high fat diet feeding or to cold exposure. This could contribute to lower energy expenditure and increase fat storage.

The results showed that for the foz/foz mice that had stimulated BAT activity, they experienced decreased body weight gain (11g vs 16g) and improved glucose tolerance compared to untreated foz/foz mice.

The results of the study were presented at The International Liver Congress.