Chemists have designed a set of molecules that promote microscopic, anatomical changes in neurons associated with the formation and retention of memories… 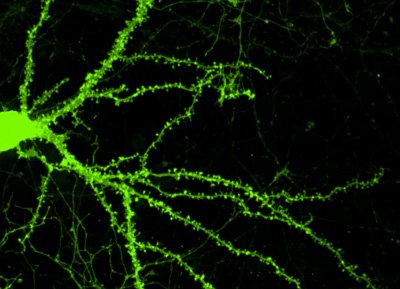 Tiny thornlike structures along the branches of this neuron are dendritic spines. Treatment with a novel compound induced the cell to sprout 20 to 25 percent more spines than a normal, untreated neuron. CREDIT: Jessica Cifelli

Chemists have designed a set of molecules that promote microscopic, anatomical changes in neurons associated with the formation and retention of memories.

These drug candidates also prevent deterioration of the same neuronal structures in the presence of amyloid-beta, a protein fragment that accumulates in the brains of people with Alzheimer’s disease.

The study, led by Jerry Yang, a professor of chemistry and biochemistry at the University of California San Diego, looked at the effect of drug candidates on the density of tiny thornlike structures called dendritic spines that bristle along the branching processes of neurons and receive incoming signals.

When the researchers treated neurons from a part of the brain critical to forming and retrieving memories with their new compounds they saw an increase in the density of dendritic spines. The new compounds also prevented the loss of these spines that occurs in the presence of amyloid-beta.

The greater the concentration of the drug candidate, the greater the density of spines within the range of doses the team tested. The effect is also reversible: once the compounds were washed away, the spines receded within 24 hours.

Earlier versions of the compounds were too toxic

Earlier versions of these compounds, also developed by Yang’s research group, improved memory and learning in normal mice and a mouse model for Alzheimer’s disease, but were too toxic to pursue as drug candidates.

Jessica Cifelli, a graduate student in Yang’s group, worked out a way to keep the part of the molecules that they believe promoted the growth of dendritic spines, but alter the chemical features that impart toxicity. These novel compounds, called benzothiazole amphiphiles, are new tools to study the relationship between dendritic spines and cognitive behaviour.

Previous studies have shown that spine densities on neurons change over time and increases in the densities correlate with improved memory and learning. The researchers say that as potential drugs, benzothiazole amphiphiles could be useful for combatting spine loss in neurodegenerative disease, or possibly for general cognitive enhancement.