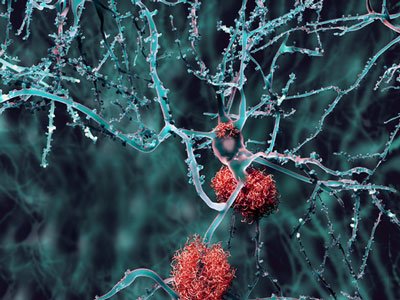 Researchers headed by scientists from University of Zurich have developed a targeted substance that blocks the pathogenic function of an enzyme that is partly responsible for Alzheimer’s disease without affecting its other vital functions.

Protein deposits in the brain are hallmarks of Alzheimer’s disease and partly responsible for the chronically progressive necrosis of the brain cells. Nowadays, these plaques can be detected at very early stages, long before the first symptoms of dementia appear. The protein clumps mainly consist of the β amyloid peptide (Aβ), a protein fragment that forms when two enzymes, β and γ secretase, cleave the amyloid precursor protein (APP) into three parts, including Aβ, which is toxic.

If β or γ secretase is blocked, this also inhibits the production of any more harmful β amyloid peptide. Consequently, for many years biomedical research has concentrated on these two enzymes as therapeutic points of attack. To date, however, the results of clinical studies using substances that block γ secretase have been sobering. The problem is that the enzyme is also involved in other key cell processes. Inhibiting the enzymes in patients therefore triggered severe side effects, such as gastrointestinal haemorrhaging or skin cancer.

Thus, for a number of years researchers have also been focusing their efforts on β secretase. A large number of substances have been developed, including some highly promising ones that reduced the amount of Aβ in mouse models effectively. Nevertheless, according to cell biologist Lawrence Rajendran of the University of Zurich, this presents the same challenge: “The current β secretase inhibitors don’t just block the enzyme function that drives the course of Alzheimer’s, but also physiologically important cell processes. Therefore, the substances currently being tested in clinical studies may also trigger nasty side effects – and thus fail.”

To address this, Saoussen Ben Halima and her fellow researchers studied how β secretase might be inhibited selectively. In a series of experiments, the scientists were able to demonstrate that the Alzheimer’s protein APP is cleft by β secretase in endosomes, special areas of the cells that are separated by membrane envelopes, while the other vital proteins are processed in other areas of the cell. The researchers exploited this spatial separation of the protein processing within the cell.

“We managed to develop a substance that only inhibits β secretase in the endosomes where the β amyloid peptide forms. The specific efficacy of our inhibitor opens up a promising way to treat Alzheimer’s effectively in future, without causing the patients any serious side effects,” says Rajendran in summary. The researchers’ next goal is to hone their drug candidate so that it can initially be tested in mice and ultimately in clinical studies on Alzheimer’s patients.