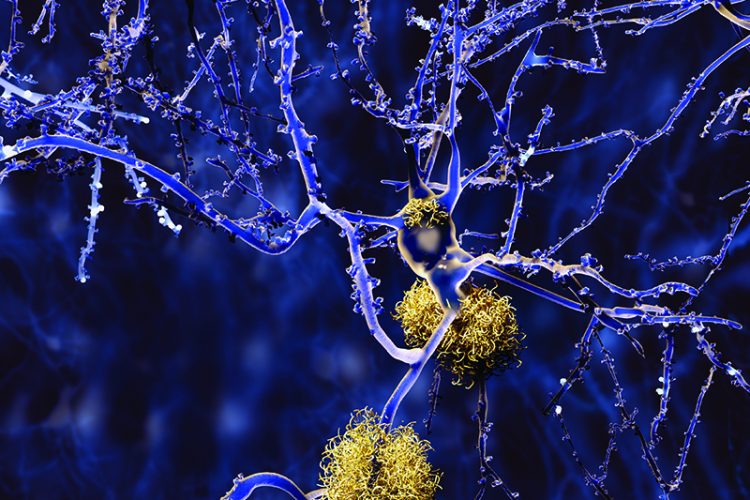 The associated clinical findings are the decline of memory capacity and disturbances in language and judgement control with other symptoms including changes in behaviour, mood and personality often observed as irritability, depression or delusions. This neurodegenerative disorder results in a complete loss of control over daily life and independence.

Presently, three stages of AD are defined: preclinical, mild cognitive impairment (MCI) and dementia1. During the preclinical stage, patients do not show AD symptoms, however, measureable changes in brain and/or blood can be seen; MCI patients exhibit changes in thinking and memory, which do not affect their daily life; in contrast, with dementia all changes in memory, thinking and behaviour significantly affect daily life2,1. In 2010, the total number of people suffering from dementia amounted to 35.6 million, with approximately 7.7 million new cases reported per year with 60-70% of all dementia cases due to AD3. The National Institute on Aging has proposed guidelines to categorise AD, which include biomarker tests, namely the accumulation of amyloid-β (Aβ) in the brain and the Tau protein which could represent the injury and degradation of neurons during progression of the disease2,1. Modulating the activity of these and other proteins has been a focus of AD drug discovery efforts.

Pathological characteristics of AD include the accumulation of amyloid plaques and intra-neuronal neurofibrillary tangles as well as the loss of neurons and synapses in brain regions such as the hippocampus, amygdala and other limbic structures4. Amyloid plaques are formed by the accumulation of Aβ peptide, which is produced by cleavage of amyloid precursor protein (APP). APP is a type 1 transmembrane protein that is found on the surface of cells in different tissues and undergoes various post-translational modifications, for example, glycosylation, phosphorylation and proteolytic cleavage5. APP is processed by the α-, β- and γ-secretases producing peptides with different biological functions. For example, its cleavage by the α-secretase ADAM10 results in the generation of APPsα, which plays a role in neuronal survival and oxidative stress protection, and the membrane bound domain C83/α-CTF5.

In the absence of α-secretase, APP is processed by β-secretase (BACE1) and γ-secretase complex into Aβ40, Aβ42 and p3 fragments that have an extensive β-sheet secondary structure, the most common forms being Aβ40 and Aβ42. Due to the hydrophobic nature of Aβ42, it is prone to self-association, forming dimers, oligomers and insoluble aggregates of fibrils5, therefore it is more often found than Aβ40 in AD plaques. However, Aβ40, the shorter form of the amyloid peptide, can also found to be co-localised with Aβ42 in amyloid plaques4. Generally, oligomers seem to be the most toxic form of amyloid species, and are associated with induction of oxidative stress, apoptosis, neurite loss and disruption of calcium balance6,7,4,8.

A complicating factor from a drug discovery perspective in relation to modulating Aβ42 concentrations is that this fragment has been shown to improve synaptic formation and memory at picomolar concentrations, with nanomolar concentrations leading to neurodegenerative effects5 indicating that subtle modulation of it may be necessary.

The high toxicity of Aβ in neurons and the increase of oligomers in the early stages of AD make it Aβ promising target for drug discovery from an antibody and small molecule perspective. One method to reduce circulating Aβ is to apply passive or active immunotherapy, the former approach involving immunisation using monoclonal anti-Aβ antibodies to prevent plaque formation and to reduce the level of free Aβ. The latter approach enables the generation of antibodies following immunisation.

A prominent example of active immunisation is seen with the AN1792 vaccine, which consists of a synthetic Aβ1-42 peptide and a surface-active saponin adjuvant, QS-21. The vaccine has been shown to reduce cerebral Aβ levels and to improve cognitive functions in animal models, however, Phase II clinical trials were terminated when 6% of patients developed meningoencephalitis in 6%9. More promisingly, in 2008, a humanised monoclonal anti-Aβ middle region antibody, solanezumab (LY2062430), was reported by Eli Lilly to have successfully completed Phase II studies9; the candidate is currently being assessed in a Phase III trial with readout expected in late 2016.

In parallel, two different strategies have been reported to inhibit Aβ aggregation using small molecules. One method is based on indirect inhibition of Aβ oligomer formation by targeting biological compartments or divalent ions such as zinc, iron and copper, which catalyse the formation of senile plaques. One example for chelation therapy is the PBT2 compound, which completed Phase IIa clinical trials10,11, but did not meet its primary endpoint. Another strategy is based on inhibition of defined amino acid regions (N-terminus, the hydrophobic core, the hinge-to-turn region and the C-terminus) that are mainly responsible for Aβ aggregation. Neurochem’s tramiprosate (3-aminopropanesulfonic acid), which targets the N-terminal region of Aβ, is an example of this approach12, however, although high specificity for Aβ could be shown, it failed at Phase III when there were no long-term improvement of cognitive functions observed. A Phase II/III clinical trial involving a cyclohexanol stereoisomer, scyllo-inositol (ELND005; Transition Therapeutics and Elan Corporation), directed against the C-terminus of Aβ also failed to meet its primary endpoint despite being shown to inhibit formation and aggregation of Aβ13. 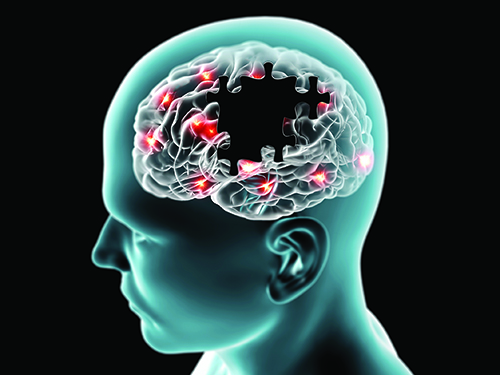 The Receptor for Advanced Glycation End-products (RAGE) is a multi-ligand pattern recognition receptor, which binds non-enzymatically glycosylated ligands and molecules containing extended β-sheets14. It exists in various forms in human plasma including cell surface RAGE, soluble RAGE (sRAGE) and endogenous secretory RAGE (esRAGE), which are due to alternative splicing of the RAGE mRNA15,16 . RAGE is expressed on the cell surface of a wide range of tissues including endothelium, smooth muscles, cardiac myocytes and neuronal tissue in the brain15,16. The expression of different isoforms and the recognition of ligands by pattern may explain why RAGE is involved in various pathophysiological processes and a wide range of diseases, such as diabetes, AD, cancer, cardiovascular diseases and inflammation16,14.

Structurally, RAGE consists of three main regions: an extracellular domain with an N-terminal signal peptide, a single transmembrane helix and a small C-terminal cytoplasmic tail for intracellular signalling17,18. The extracellular located region consists of three immunoglobulin-like domains (Vd, C1d, C2d) characterised by two β-sheet structures, which are formed by antiparallel β-strands connected by a disulfide linkage15,19. The majority of ligands such as Aβ oligomers and associated aggregates, S100B or S100A6, bind to the V-C1 domain20,18. In the case of Aβ oligomers, a hydrophobic domain of the peptide with two terminal negatively-charged amino acids interact with the N-terminal sequence of RAGE located in the Vd domain20,18. In principle, targeting RAGE could result in an anti-inflammatory effect and offer protection of neurons in AD and one strategy is to block the RAGE/Aβ interaction using anti-RAGE antibodies or hetero-oligomerisation of the receptor with sRAGE and thus prevent ligand binding. However, this anti-RAGE antibody approach has a limited benefit due to the lack of permeability of the blood-brain-barrier (BBB) to the antibodies and thus only sequesters peripheral RAGE21,16,22.

The small molecule drug discovery approach overcomes this problem and two main small molecule subsets have been evaluated in clinical trials. The first group contains azole-based compounds, the prominent agent being PF-04494700 (TTP 488), which exhibited no benefit in a clinical trial. The second group of small molecule inhibitors contains tertiary amides, with the prominent agent being FPS-ZM1, a reversible RAGE-Vd inhibitor with a possible mechanism of action being that it binds the electron-poor aromatic ring to RAGE with an IC50 in the low nano-molar range for 125I-Aβ4016. In mouse models it was demonstrated that FPS-ZM1 exhibits a good BBB permeability and can restore object recognition and learning ability in AD mice. It is not clear whether this is currently being evaluated in a clinical trial.

Although AD was described by Alois Alzheimer as long ago as 1906, there is still no curative treatment available. A number of therapeutics have been approved for clinical use, but significant deficiencies still exist with these. However, many attempts have, and are currently being made that could lead to the development of the next generation of small molecule therapeutics for AD. A comprehensive list of drugs that have been evaluated for AD are publically available, as well as draft guidance for companies that are developing AD drugs for the treatment of its early stages. With several clinical trials involving antibody-based therapies ongoing, the next few years will be an exciting period as it will become clear whether new drugs will secure approval for clinical use.

SHERAZ GUL is the Head of Assay Development & Screening at the Fraunhofer-IME SP, Hamburg, Germany. Prior to this, he worked for GlaxoSmithKline for seven years, developing biochemical and cellular assays for high-throughput screening. He has a PhD and five years’ post-doctoral research experience from the University of London.

MARIA KUZIKOV studied Molecular Life Sciences at the University of Lübeck. After obtaining her MSc in 2013 she began working at the Fraunhofer-IME SP and here she is responsible for the development of biochemical, cell-based and high content assays for screening and early ADME-Tox profiling studies.