Neutrons, electrically neutral particles found within the nucleus of the atom, are coming into their own in the exploration of new ways to get drugs to their targets. Neutron techniques are being used to investigate innovative new approaches to drug delivery that could increase the effectiveness of treatments, improve the comfort for patients and lower costs for the global healthcare industry. 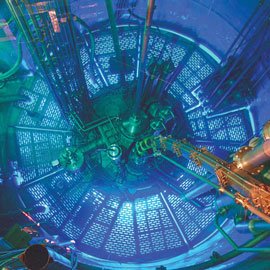 One solution gaining interest from the world of drug R&D is the possibility of transporting reservoirs of pharmaceuticals to cell membranes. These ‘tiny packets’ called self-assembled nanoparticles form spontaneously when fatty molecules and functional macromolecules are mixed together in a liquid. There is hope that these nanoparticles could be manufactured to bind specifically to infected tissue, such as cancer cells, for slow, concentrated drug delivery. Such an approach could provide a way to reduce dosages and the frequency of injections administered to patients undergoing a wide variety of treatments, as well as minimising side effects of over-dosing.

The first treatments using self-assembled nanoparticles are close to the market, such as those developed and commercialised by Swedish start-up Camarus Ab. A key requirement for optimal application of such formulations is a detailed understanding of how they interact with cell membranes. The potential of such treatments was described in a recent paper published in ACS Macro Letters by myself and researchers from the University of Copenhagen. In this study, the factors relevant to the attachment of reservoirs of lamellar phase nanoparticles to model cell membranes combined with the slow diffusion of macromolecules across to the other side were revealed. More about this later… First let’s look at the rise of neutron science in drug targeting.

For several decades X-ray crystallography was the preferred technique by the pharmaceutical industry to determine how drugs interact with protein targets. X-rays are scattered by the electron clouds of the atoms in a crystalline sample to determine the atomic structure. However X-ray techniques have their own limitations. Hydrogen atoms with only one electron are virtually invisible to X-ray analysis, leaving scientists to speculate on their positions despite their importance in drug binding through hydrogen bonding.

This is where neutrons come into their own. Rather than being scattered by the electron clouds, neutrons are scattered by the atomic nuclei in a crystalline structure, allowing the positions of all atoms to be determined, including lighter elements such as hydrogen.

Also, in comparison with laser and spectroscopic techniques which exploit visible light, neutrons have a wavelength about a thousand times shorter, which allows the position of individual atoms to be determined. An interference pattern is produced that can be used to resolve molecular structures when neutrons interact with nanostructures in solution or at interfaces.