Scientists discover genetic cause and mechanism of noise-induced hearing loss

The absence of pejvakin appears to be responsible for noise-induced hearing loss, one of the most common causes of deafness… 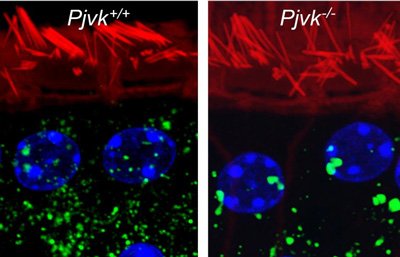 Scientists have recently discovered the function of pejvakin, a molecule that plays a vital role in the hearing system.

The absence of this molecule appears to be responsible for noise-induced hearing loss, one of the most common causes of deafness. The scientists’ discovery offers new prospects for the treatment of this condition.

In 2006, the team led by Christine Petit in the Institut Pasteur‘s Genetics & Physiology of Hearing Unit, identified a new gene that was responsible for early-onset sensorineural hearing loss. This gene codes for a protein which was given the name “pejvakin”. Audiometric tests performed on individuals with mutations in this gene subsequently revealed an unusually high level of diversity in hearing impairments, in terms of both severity and characteristics. This latest study aimed to clarify the reasons for this heterogeneity.

The scientists studied young mice whose pejvakin gene had been inactivated. Their observations revealed an astonishing variation in hearing impairments from one mouse to the next, ranging from mild to profound hearing loss. Young mice are highly vocal for the first three weeks after they are born, particularly when feeding. The more mice there are in the cage, the noisier their acoustic environment. The scientists observed that as the number of mice in the cage increased, so did their hearing threshold – the minimum sound level at which they are able to hear sounds. Using direct, controlled acoustic stimulation, the scientists were able to prove that the auditory system of mice lacking in pejvakin is affected by their acoustic environment.

The scientists then set about investigating the physiological causes of this phenomenon. They observed that in mice without pejvakin, the auditory sensory cells are damaged as soon as they are exposed to even seemingly harmless sounds – the equivalent of a minute spent in a nightclub for humans. These cells need two weeks of silence to become functional again. With prolonged or repeated exposure, the cells eventually die. The scientists also identified the noise-sensitive element in the cell as being the peroxisome, a small organelle involved in detoxification. “To put it simply, we discovered that a genetic disorder could be responsible for noise-induced hearing loss triggered by even very low noise levels,” explained Christine Petit.

The auditory sensory cells in people with impaired pejvakin were observed to be extremely vulnerable to noise. When a standard hearing test was performed on these hearing-impaired individuals, the responses of their auditory sensory cells and neurons, although normal to begin with, gradually worsened as the test went on as a result of the sounds used.

The scientists will now look into possible techniques to restore the function of pejvakin, particularly using gene therapy, which has already proved successful in conserving hearing in mice lacking in pejvakin, even when they are overexposed to noise.