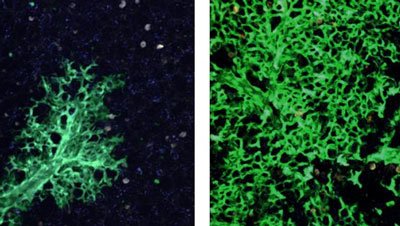 Diseases of the airways, such as emphysema, bronchitis, asthma and cystic fibrosis, are the second leading cause of death worldwide.

Weizmann Institute scientists have now proposed a new direction that could, in the future, lead to the development of a method for alleviating some of their suffering. The study’s findings show how it might be possible to use embryonic stem cells to repair damaged lung tissue.

The research began with an insight: certain stem cells that normally reside in the lungs are highly similar to those in the bone marrow. In each organ, the stem cells, rather than being distributed throughout the tissue, are concentrated in special compartments that contain all the provisions that stem cells need. Professor Yair Reisner of the Weizmann Institute’s Immunology Department explained, “That understanding suggested to us that we might be able to apply our knowledge of techniques for transplanting bone marrow stem cells to repairing lung tissue.”

Bone marrow transplant is based on two main principles: the ability of stem cells to navigate through the blood to the appropriate compartment and the prior clearing out of the compartment to make room for the transplanted stem cells. Reisner and his group thought it might possible to apply these principles to introducing new stem cells into the lungs. But before they could do this, they needed to find a source of lung stem cells suitable for transplanting.

The group overcame this obstacle by using embryonic stem cells from the 20th – 22nd week. Their research showed that this is the ideal time frame in which to harvest the cells: Younger cells have not completed the process of differentiation; older cells are less capable of lung regeneration. The team then conducted a series of experiments in which they cleared the lung’s stem cell compartments with a method they had developed, and then the new stem cells were injected into mouse models of lung damage. The embryonic lung stem cells managed to find their way through the blood to the lungs and settle into the proper compartment. By six weeks, these cells were differentiating into normal lung tissue. The damaged lungs healed in the mice, and their breathing improved significantly.

Next, Reisner intends to determine the correct dosage of drugs that are needed to prevent rejection of the transplanted cells, which will be needed following such procedures. “But our real vision, bolstered by this success,” says Reisner, “is to create a bank of lung tissue that will be a resource for embryonic lung stem cells.” This bank could mean that there is a ready source of cells for repairing the damage in those with severe respiratory disease.