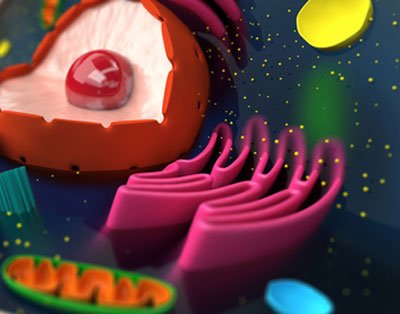 The compound, called azoramide, works by focusing on an organelle called the endoplasmic reticulum (ER). The ER is a tubular network within all cells where many key molecular building blocks of glucose metabolism, such as lipids and proteins, are synthesized. When someone is obese, the ER in metabolic tissues such as the liver, fat, and pancreas can no longer keep up with the demand for protein and lipid production. This results in ER stress which contributes to cellular dysfunction and the development of insulin resistance. Insulin resistance in turn makes it difficult for the body to process glucose —high blood sugar and type 2 diabetes result, as well as a cascade of other cellular malfunctions that can lead to heart and blood vessel damage.

“While we and others had previously discovered the central role that ER stress plays in diabetes and metabolic disease, efforts to translate that knowledge into clinically effective ways to improve ER function have had limited success so far,” says Gökhan S. Hotamisligil, chair of the Department of Genetics and Complex Diseases and the Sabri Ülker Center at Harvard T.H. Chan School of Public Health.

Azoramide could protect cells from death and dysfunction

The study describes the development of two complementary assays that allow scientists to directly monitor ER function in live cellular systems in culture in the lab. This screening system enables measurement of the amount of chaperones, molecules that patrol and promote ER function, as well as the capacity of the ER to properly fold proteins into their three-dimensional shapes. Using this technique, they showed that azoramide uniquely improved both of these aspects of ER function. In further mechanistic work, they also demonstrated that azoramide could protect cells from death and dysfunction in multiple models of ER stress.

The researchers next tested whether azoramide would be effective in mouse models of obesity and type 2 diabetes, and determined that it greatly improved blood glucose levels by improving both the function of insulin-producing beta cells and increasing the ability of peripheral tissues to sense insulin. The next phase of this research would be to test this compound, or others that work in a similar manner, in human clinical trials.

In another aspect of the paper’s research the scientists determined that azoramide could potentially protect retinal cells from the genetic mutation that leads to ER stress and ultimately vision loss in one type of the disease retinitis pigmentosa.

“These results show the broad potential for azoramide or drugs with similar functions targeted at the endoplasmic reticulum,” said Hotamisligil. “ER dysfunction is implicated in many other disease processes such as cystic fibrosis, Huntington’s disease, and Alzheimer’s—which makes this novel screening strategy an exciting new tool that can be applied by multiple labs to discover new drug candidates for diseases that are linked to ER stress.”

The study appears in the journal Science Translational Medicine.