The latest trends in lab robotics and automation

For those that couldn’t attend, here is a summary of some of the interesting insights shared at ELRIG’s recent Robotics and Automation 2014 Conference. 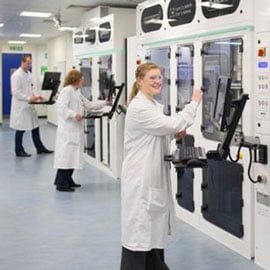 There was a great turn-out at ELRIG’s recent Lab Robotics and Automation 2014 Conference (1st July), with people from industry and academia coming together to revel in the amazing technology on show. A fascinating selection of talks and exhibits kept people on the edges of their seats; hidden beneath a few of which were even tokens for a fluidic-muscle driven F1 racing simulator contest, organised by hosts Festo.

For those that couldn’t attend, here is a summary of some of the interesting insights shared at the event.

The evolution of lab robotics and automation

Simon Tickle (UCB) gave some great insight into the needs of those working in therapeutic antibody discovery outlining how automation is continuing to help drive the ongoing evolution of screening programs. For example, in his laboratory, this has led to the creation of a complex and integrated screening system combining filling, screening and hit-picking work cells, all under the control of app-like software on touch screen displays. The technology is now being opened up to academics and research groups that would like to make use of the fully automated discovery platform. The robots have their own IP addresses and email accounts for off-site interaction.

Later on, Ross King (University of Manchester) walked the audience through the development of computers capable of conducting science; not just robots eliminating some of the repetitive aspects of bench work, but an artificial intelligence (AI) system capable of designing the hypothesis, executing the experiment, interpreting the results and moving on to repeat and iterate the process – a real ‘Robot Scientist’.

The first iteration of this robot scientist, named Adam, was the first machine to have discovered novel scientific knowledge. The next model, Eve, is being developed to automate drug discovery (assay design, screening, hit confirmation etc.) and will be focussing ‘her’ attention on tropical diseases. This amazing AI makes use of first-order predicate logic (rather than Boolean fingerprinting) to analyse the quantitative structural activity relationships (QSARs) of potential chemical candidates.

The increasing sophistication of automated systems for improving the speed, accuracy and reproducibility of lab processes, such as the generation of antibodies or the screening of vast numbers of compounds, was a trend discussed by several speakers. It was genuinely astonishing to see just how far technology has moved along in a relatively short period of time and how the required skill set has both grown and diversified into an eclectic mix of science, engineering and project management; lots of people had to get very smart, very quickly, in this area!

Festo’s Nigel Dawson presented an impressive selection of the robotic ingenuity applied at the company. We were also introduced to the Bionic Learning Network, an open source research network linking numerous universities, institutes, companies and private inventors, allowing ideas and technology about biomimetics and biomechatronics to be freely shared and developed.

A common theme in the development of the robots presented by Nigel was ‘autonomous collaboration’. In the development of robotic penguins for example, individual robots propel themselves through the water (or the air!) completely autonomously but also collaboratively: groups of these will swim – remaining together – without colliding into each other thanks to a 3D sonar system. This spatial awareness was beautifully demonstrated by the eMotion Spheres: eight helium-filled spheres driven by propellers capable of precise, collaborative, responsive movement, as well as autonomous charging when their power sources began to dwindle. Other exciting inventions included the BionicOpter, the SmartBird and the Bionic Handling system, capable of delicate and versatile mechanical gripping.

When asked about the practical applications of some of these, Nigel explained that it was much more about what they learnt during a project’s three years of production, in terms of technical innovation, rather than the development of a commercial end product. Many of the innovations underpinning current and future products evolved out of these biomimetic projects. For example, the versatile handling system, which can tightly grip objects of a variety of shapes without damaging them, borrows heavily from design principles unexpectedly learnt when replicating the structure and functions of a fish’s tail.

The show was an excellent insight into the innovations taking place in lab robotics and automation – we’ll look forward to the next!

This blog originally appeared on the BioStrata website, a specialist marketing agency serving life science companies – you can find similar content exploring the latest trends in the life science industry by visiting the company’s blog.